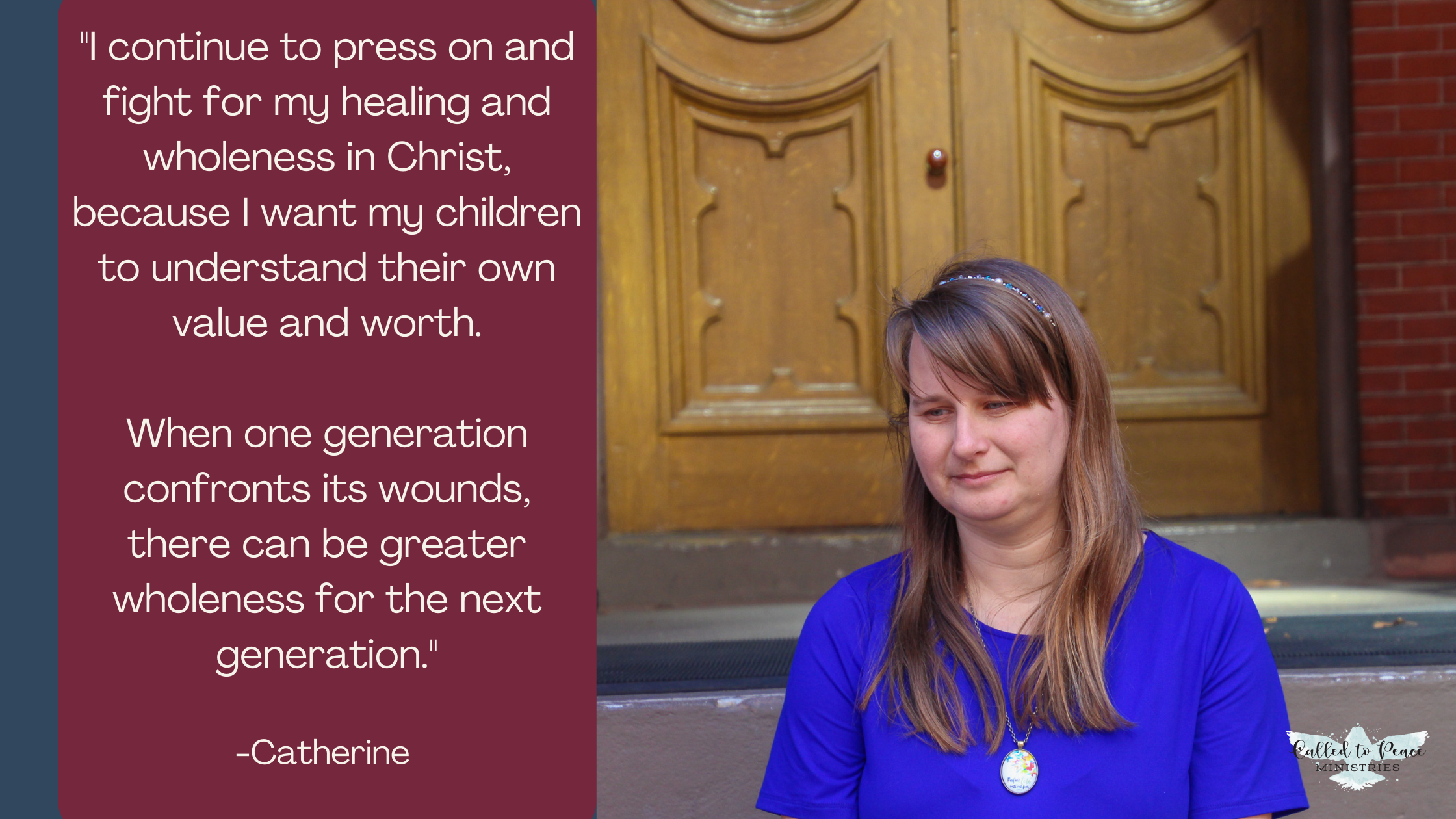 As told by Catherine, written by Lauren Rose

Physical abuse was heavy at the beginning of our marriage, but it was the spiritual, verbal, and mental abuse at the end that was most intense. Likely because by that point he knew that was where he could get the maximum response and damage – not to mention it keeps the civil authorities out of the equation.

As horrible as physical abuse is, verbal abuse was the worst. It takes a lot longer to heal from verbal abuse than physical.

One night, the abuse got so bad that I took my four children and left for a few nights. I reached out to Priscilla again, in great distress.

Throughout this past year, we have shared Catherine’s story under the name “Christine.” (You can read Parts 1 and 2 here.) But as you will see, it is important for her to share under her real name, Catherine. Catherine tells her story, which she shared at the CTPM Candlelight Vigil in October.

My abuser’s behavior caused me so much anxiety. In my woundedness, I wanted to fight back at his false accusations. I wanted to assert my worth by countering his belittling of me.

But Priscilla helped me calm myself and respond confidently with truth and wisdom. She then helped me understand how to talk to my pastor about what was happening in my marriage.

This was so important. I was able to clearly articulate the dynamics of abuse in our relationship without sharing overwhelming details that were only the surface of the more significant issue underneath: coercive control.

My pastors had received training in coercive control, so they were able to sympathize and understand. They knew that what I was facing was not just a marital conflict, but was abuse.

That began my journey of recovery, with my church walking alongside me. (Read more ABOUT THIS JOURNEY here and here.)

Several of my church’s elders encouraged me to attend the CTPM retreat in 2021, and the church arranged for me to go. One elder, a well-known doctor in our local children’s hospital, even told me he would be on call in case my child with medical issues needed anything. This way I could go with the peace of mind that everything was covered.

At the retreat my heart was heavy, and one evening after worship I walked up to Priscilla for prayer. The pain was so great I couldn’t speak but mumbled, “I cannot; it’s dark.”

Priscilla began praying over me. Then she shared, “Your name Catherine means, ‘Esteemed One,’ one who is valued.”

I stood in shock. This was not who my husband had said I was. He had told me repeatedly, “You are worthless.” He reinforced that lie with his words and actions, and I had believed him.

But now I saw that from birth God had given me a name that went against that curse.

The next night at a lantern ceremony, we were asked to write a word on our lantern, something God had been teaching us. I wrote “Identity,” because God had given me the identity of being valued.

My abuser had tried to destroy my core identity. Because of this, understanding my value and worth has been the most significant part of my healing.

At that retreat I also met my support group leader, Brooke Eggen, in person. My CTPM support group has helped me process the lies from abuse and helped me further understand my value and worth.

My church also understood this truth and has kept reminding me of my worth, telling me by their actions and words that I’m worthy of love. Through them, this truth has been able to sink within my heart. After years of abuse and isolation, my church family and CTPM have built a loving community of support around me. My whole being has finally felt safe to lay down the load I carried alone for so long. (You can read more about that journey here.)

My church helped me get into counseling and walked with me through the aftermath. I found that my grief and depression were rooted not only in my abusive marriage, but in the abuse I endured growing up.

The generational cycle of trauma was strong in my family, but it was the spiritual abuse that had sunk its teeth deepest in me.

In my family of origin, I saw God’s love as something I had to earn. I believed I had to be “godly” enough to receive acceptance. As a child I became used to being the problem for everything. I interpreted my family’s inability to love me as my fault because I wasn’t “godly” enough, so I tried harder to be a better Christian. The Bible was consistently used to control, demand perfection, and isolate. I didn’t know it spoke of my value and worth to the Lord.

For years, my sense of worthlessness caused deep feelings of wanting to end my life. But I was told I wasn’t allowed to struggle with that, and if I did, “I’d ruin the family image” before church and community.

My pastor said, “You married your husband because the abuse you experienced was interpreted as ‘normal.'” He was right; my background set me up for my husband to control and abuse me.

I continue to press on and fight for my healing and wholeness in Christ, because I want my children to understand their own value and worth.

When one generation confronts its wounds, there can be greater wholeness for the next generation.

I want to be a cycle breaker. The beliefs that abuse is normal and I am unworthy of love end with me.