“Christine’s” Church Introduced Her to Love After Abuse 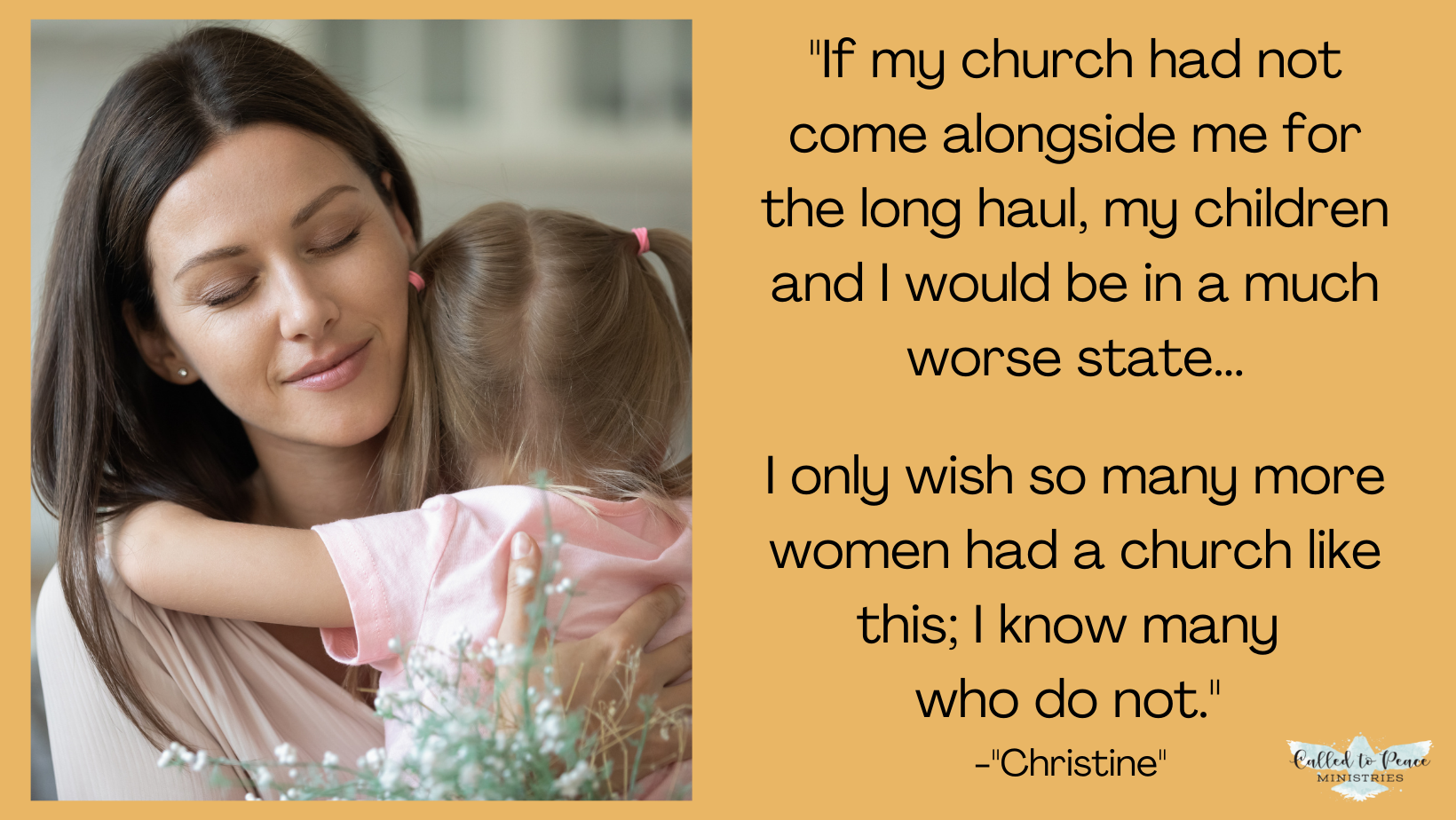 As told by “Christine,” and written by Lauren Rose

I separated from my husband three times because of the abuse, but I was blessed that God placed me in churches that rallied around my children and me at each of those times. This is still amazing to me, considering how many times my husband uprooted us from church – 11 churches in eight years of marriage!

The three churches that supported our family helped in tangible ways, and I wanted to share how they assisted me and what that support did for my children and me. I desire that every family touched by domestic abuse might experience the same support and God’s love I did from my church family.

Perhaps the most significant gift of having supportive churches has been a handful of close friendships I formed. These friends in my darkest hours of crisis have not only come alongside but climbed into my darkness with me. They encouraged me to let my feelings out, whether that be in lamenting through the Psalms, giving me a night away from family to rest and refocus, sitting with me and just letting me cry, or even being a phone call away in the middle of the night when it felt like everything was crashing down. All with no judgment, just love!

I once asked my pastoral care pastor, “How can someone understand covenant love when the only covenant relationship (marriage) one has known has been everything that Christ’s love is not?” I don’t have that question now.

My community has showered me with so much of God’s love (and continues to) that I often get overwhelmed at how much love can pour out from His people just being willing to love as He loves. I still have my hard days, but leaning into a covenant community of believers who “get it” it becomes easier each day.

How My Churches Demonstrated Covenantal Christ-like Love to Me!

Church #1 – A couple of single young ladies in the church were the first to answer my call for help. They came to my house after my abuser had physically assaulted me. They insisted that my two daughters (one and three at the time) and I come to their home an hour and a half away until the elders could sit down with us. (We stayed with them for two months.)

The first elder assured me that what my husband had done was abusive, regardless of whether or not I had done anything wrong. Two nights after the physical abuse, all three elders from that church sat down with my husband and me* and confronted him, making it clear that I would not return until I was ready.

*(CTPM does not recommend bringing couples together in these situations, but we still acknowledge the great care and concern these elders showed.)

The initial elder then followed me back in his car to where I was staying, filling my gas tank to ensure I safely arrived. The same elder and one of the deacons would come by every week or two and take us grocery shopping and get diapers (my husband had taken our only car back by then). The church held my hand as I walked through this – including accompanying me to the police station to make my report and taking me to the hospital when I could no longer handle the pain from the concussion, he had given me.

Church #2 – This is the church my abuser moved us to after we “reconciled” to get away from church number one. As soon as I contacted them about the abuse, this time with three little ones in tow (six months, three, and five), the elder and his wife came to the hotel I was staying at for safety and brought us back to their house for the whole weekend.

While there, CPS showed up after I reported that he had abused me in front of the children. CPS was blown away, the day they came to meet with me, that all my elders, one of their wives, and both church deacons were already there and pledged to take care of us and keep us safe. The CPS worker said she had never seen anything like it. They convinced my abuser to move out of the apartment so the children wouldn’t be overly disrupted and took us out regularly for groceries and to the park for the kids.

They insisted that he had to be individually counseled and held accountable to other men in the church. They made sure that we were never left alone on Sundays when he was nearby so that he had no opportunity to abuse me further, whether physical or verbal.

​Church #3 (my current church) – I came to this church after physically removing myself several states away from my abuser. At the time, we believed it to be temporary due to financial strains from him losing his job while I was recovering from postpartum depression after the birth of our fourth child. When I started counseling for the depression, the counselor, who introduced me to this church, quickly realized it wasn’t birth-related – it was from all the abuse I had suffered. When I asked the church elders to pray by a pew card, they reached out to me for the full story.

When my abuser attempted to get his own pastor involved in another state to have my elders “talk some sense” into me, my church commissioned two elders (one an assistant DA) and a deaconess as a committee to meet with them on my behalf – the ADA came prepared with documentation of my abuse and shut down the attempts of my abuser and his pastor into shaming me to returning home.

I don’t have the words to describe what their support has meant to me – without their community approach to loving and helping; I do not believe I could have avoided returning and possibly finding myself never able to escape again.

If they had not come alongside me for the long haul, my children and I would be in a much worse state. They also restored my sense of worth in Christ by continually reminding me that what happened to me is not who I am and that I am a precious daughter of God whose heavenly Husband (Isaiah 54) delights in her.

I only wish so many more women had a church like this; I know many who do not.