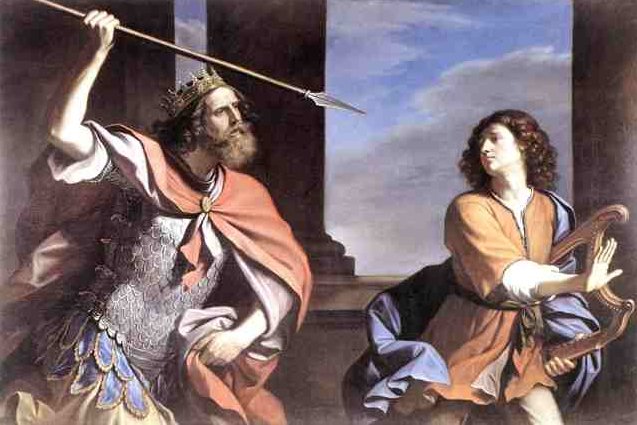 People often ask me for specific biblical counsel on domestic violence, and though there is not a specific case of blatant spousal abuse in scripture, there are numerous accounts of abuse. The very first example of family violence came very early in the history of mankind when Cain killed Abel. The inhabitants of Sodom and Gomorrah were known for their wickedness, which apparently included blatant sexual abuse on a regular basis. Joseph was abused by his brothers. The Levite in Judges 19 casually threw his concubine out to a mob to be raped, and when she died as a result of her injuries he cut her into pieces to show Israel how his property had been destroyed. Family violence touched king David’s household when Amnon raped Tamar and later Absalom killed him. If I were a betting woman, I would bet that Abigail’s husband Nabal was abusive towards her. Scripture tells us he “was harsh and evil in his dealings” (1 Sam. 25:3), and as a former victim I can relate to the ways she tried to make up for her husband’s foolishness. The Old Testament is filled with violence, and God’s prophets regularly preached against it. In the New Testament, we see God in the flesh enduring abuse at the hands of his own children. He came to earth and took on the worst abuse imaginable in order to redeem his fallen creation. What amazing love! We have a God who cares about abuse, and we have a bible that is by no means silent on the subject.

Although scripture is filled with examples of violence and abuse, one of my biggest frustrations with churches over the years has been a severe lack of knowledge when it comes to the dynamics of domestic abuse. Scripture indicates that a lack of knowledge causes people to perish, and nothing is truer when it comes to abuse. I have had some limited success in sharing secular resources that describe the characteristics of abuse in church and seminary trainings, and even though they are based on observation I feel sure pastors and counselors would prefer to use scripture as their guide. For decades, each time I have read the story of Saul and David I have recognized the dynamics of abuse in play. Saul seems to be the embodiment of just about every abuser I have ever known. And while this is not an account that deals with intimate partner violence, I believe it is very applicable. Abuse usually just boils down to one person asserting malicious control over another, and that is exactly what we see here. We also see Saul abuse his position of authority over David, which is often the case in spousal abuse, particularly for more conservative Christians.

Recently my yearly bible reading plan brought me to the story of Saul and David in 1 Samuel, so I decided to make a list of the common abusive traits I recognized in Saul. Abusers tend to become attached to their victims very quickly, and we see in the same was true in this account. David was hired to play the harp for Saul, and it said that “Saul loved him greatly” (16:21). Obviously, this love was based on what David could offer Saul. Another trait that is very common with abusive personalities is the tendency to be insecure and jealous. Although the jealousy here is a little different that in an intimate relationship where the abuser fears losing the affection of the victim, the root is still the same. In this story, Saul was afraid of losing the affection of the people to David. Fear and insecurity are very common attributes of abusers. It is what drives them to control, and Saul was often consumed with fear.

Those of us who have lived with abuse know all too well that abusers are prone to sudden mood swings for no apparent reason, and that was certainly true of King Saul. One day, as David was ministering to him with music, Saul suddenly hurled a spear at him. Most people believe that abuse is provoked, but nothing could be further from the truth. During my time at the domestic violence shelter, I met scores of women who shared their stories of unprovoked abuse. It seems that little things could set off their abusers, from folding towels the wrong way to putting something on the wrong shelf in the refrigerator. Sometimes, like Saul, their abusers would be in a good mood and suddenly turn on them.

While many people assume abuse is born out of passion and a lack of self-control, the story of King Saul and David shows is it is far more insidious. Even when Saul was not in a rage, he made efforts to hurt David. His decision to give his daughter to David in marriage was so that she would ‘be a snare for him” (18:21). I have seen this seen this characteristic show up often in counseling situations within the church. Abusers have a talent for making malicious decisions look generous and kind to the outside world, while only their partners know the cruel intentions behind them. In one situation, church counselors told the husband to do something tangible to bless his wife. The action he chose was to offer her something he knew she hated and when she declined his invitation, he went back to the church and reported that she refused him. He made it seem as though he was doing everything in his power to make it work, and she was flatly denying him. He was much more vocal than she was in counseling sessions, so the outcome in this particular case was that the wife was labeled as antagonistic and resistant to her husband’s leadership. It seemed as though he was the victim rather than she.

Most abusers do see themselves as the victim, and Saul was no exception. When the priests at Nob aided David and his men, Saul lamented that everyone seemed to be conspiring against him, and that no one was sorry for him (22:8). When the Ziphites reported David’s whereabouts to Saul, he thanked them for having compassion on him (23:21) as though he was the underdog in the situation. David was hiding out in caves in an effort to preserve his life, yet Saul still saw himself as the victim. This is such a common trait among abusers. They are masters at turning truth upside down and making their victims seem to be the perpetrators. To outsiders it can certainly appear that way. Abusers love to influence the perception of others by causing them to think their victims are equally responsible for the violence.

While public perception often tends to place blame on victims, the vast majority I have known have done everything in their power to avoid the violence in their marriages. Many women (like I once did) have strict understanding of biblical headship and submission. They are told in their counseling sessions that they should submit and win him without a word. Then if he does wrong, then God will surely deal with him. However, the case of David and Saul shows us that submission and honor do not necessarily result in stopping the abuse. David never did anything to intentionally provoke Saul—like most victims he was completely baffled by the abuse (20:1). In fact, Saul’s violence often occurred when David was ministering to him (18:10, 19:9). While abusive people seem to truly believe their victims are provoking them, in most instances that simply is not the case.

Those who desire to help families affected by domestic violence must learn to recognize common abusive traits, such as these found in the story of Saul and David, and realize that victims do not cause the abuse. Absolutely, I have seen situations where the victim has learned to be angry (Pr. 22:24-25), and perhaps seemed equally violent. However, in the overwhelming majority of cases I have observed within the church, this has not been the case. (And even if it had been, abuse is never justified!) My experience in conservative, bible-believing churches has been that Christian women who tend to be victims can tend to be very passive. I tell people I once subscribed to “doormat theology;” meaning I truly believed if I submitted and showered my abuser with kindness he would certainly change his ways. Unfortunately, somewhere in that process I inadvertently enabled his sin. Of course there were times when I tried to break out and went to the church for help, but most of them failed to recognize the dynamics of abuse. The result was that they too unintentionally enabled him through their counsel. Even those who were wise enough to help me take a stand against the violence missed the boat when it came to reconciliation, because they did not understand the propensity for abusers to feign repentance. In the end, I always reconciled too soon, because I believed he was sorry, and I thought that forgiveness meant I had to trust him again.

In the story of Saul and David, it is clear that Saul never truly repented. Sure he confessed, he cried and he acted broken over his sin (24:16-17, 26:21), but David knew he still could not be trusted. True repentance involves a change in behavior over a course of time. Saul “repented” in chapter 24, but by chapter 26 he was seeking to kill David again. Domestic violence can easily turn deadly, and churches need to wake up to this fact. Too often our counsel is so anti-divorce that it ends up sending women and children back into harmful situations. Encouraging reconciliation without true repentance, and without someone helping the wife hold her husband accountable is just plain dangerous! In the past year alone, in my small county, I have had personal ties to 2 women who were killed as a result of domestic violence. They were both Believers and part of local churches, yet when I reach out to churches to offer training on domestic violence, most pastors indicate that they do not believe it is a problem in their congregations.

Statistics indicate that as many as 1 in 3 women will be physically abused by an intimate partner at some point in their lives, and these numbers are no better for women within the walls of our churches. Domestic abuse thrives in secrecy, and victims go to great links to protect their abusers from exposure, so whether you are aware or not, it is happening in your church. The question is whether or not you will educate yourself enough to help rather than hurt when someone finally musters up the courage to let you in on their family secret. Recognizing the characteristics is one of the first steps in learning to help rather perpetuate the problem. Scripture is not silent on the subject, and this story of the first two kings of Israel can help you better understand the dynamics of abuse. My prayer is that God’s people will rise up, and decide to be part of the solution when is comes to overcoming this hidden epidemic.