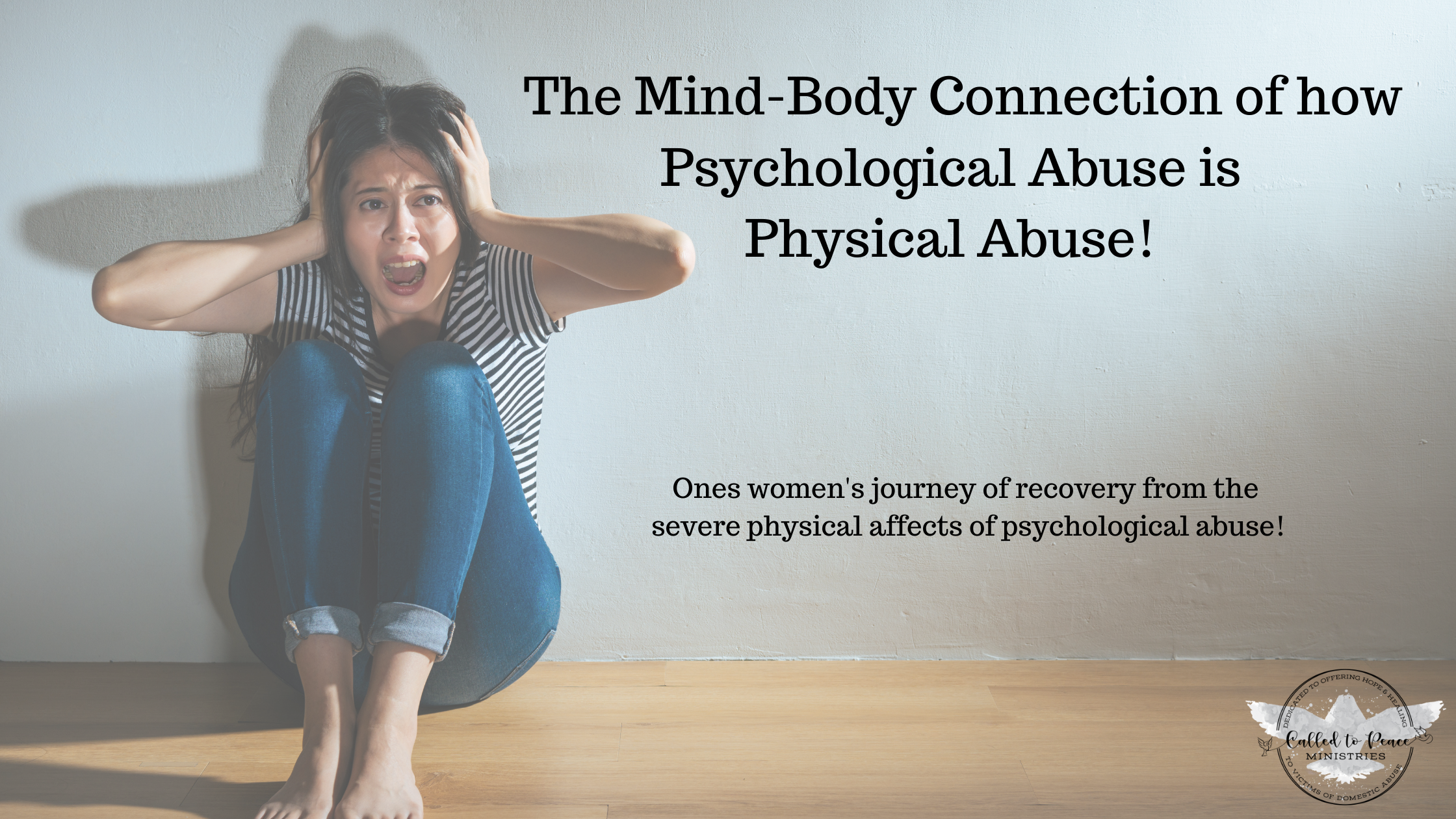 The disclosure of my abuse has been met with varying degrees of compassion. One clergyman responded, “Let me ask you this: was it physical?”

His question stung. I was bewildered. He seemed more concerned with the theological justification or classification of my separation — my flight to safety — than the decade of trauma that had set me to flight.

“Psychological abuse is physical abuse,” I replied after collecting myself.

The fallout in my body and my life had been incalculable. I had spent tens of thousands of dollars and much of the previous decade going from doctor to doctor—neurologists, gastroenterologists, pain specialists, sleep doctors, and functional medicine doctors— trying to figure out what was happening to my body and how to fix it.

My belly was distended, and the pain that has started in the small of my back spread down into my tailbone, up into my spine and eventually into my hands and feet. I suffered from debilitating and chronic fatigue, involuntary muscle movements, and sleep disturbances. My life was characterized by fear, even by terror. I had narrowly escaped death itself.

Trauma puts the body’s systems on high alert, a state of emergency. We respond with fight, flight, or freeze.

Recently, at the Called to Peace retreat, Dr. Amy Bruton described the physical fallout of long-term emotional and psychological abuse on the body.
It depletes neurotransmitters like norepinephrine, serotonin, and GABA, which can cause cascading problems throughout the body like stomach issues, heart palpitations, blood pressure problems, migraines, fatigue, and brain fog.

Trauma causes the release of inflammatory hormones like histamines and leukotrienes, which create physical pain throughout the body—muscle and joint pain and headaches. WebMD says that leukotrienes are an “inflammatory chemical” that causes the “tightening of airway muscles and the production of excess mucus and fluid.” Shortness of breath and allergic-type symptoms

Dr. Bruton explained that this horrible cycle set in motion in the body continues even after a victim escapes the abusive environment.

Healing requires a concentrated effort, much as it does for someone escaping a cult or a prisoner of war escaping the enemy.

We are fearfully and wonderfully made. Our body is not separate from our thoughts or our emotions.

In the Psalms, David describes this mind-body connection well:

“Be not far from Me,
For trouble is near;
For there is none to help.
Many bulls have surrounded Me;
Strong bulls of Bashan have encircled Me.
They gape at Me with their mouths,
Like a raging and roaring lion.
I am poured out like water,
And all My bones are out of joint;
My heart is like wax;
It has melted within Me.
My strength is dried up like a potsherd,
And My tongue clings to My jaws;
You have brought Me to the dust of death.”
(Psalm 22:11-15, NKJV)

After living in fear and intimidation under the threat of punishment for years, my body still literally shakes with involuntary muscle movements. I was in such physical pain for a time that I could not even raise my hands in worship. So debilitated, I could only lie on the floor on my back, weeping. I was unable to drive. My mother had to come to take care of me.

My body was trying to tell me what my mind could not yet acknowledge: I wasn’t safe in my own home.

I felt like scorpions surrounded me with tails poised to sting. That’s how I described my mental anguish to a friend. But I wasn’t the first to feel that way.

As I read the passage for what seemed the first time, a sense of God’s nearness washed over me. I marveled that He knew my most intimate thoughts and feelings and had recorded them in the pages of scripture long before I was ever born. He saw my suffering. I was not forgotten.

David knew this suffering, too.

“For dogs have surrounded Me;
The congregation of the wicked has enclosed me…
Deliver Me from the sword,
My precious life from the power of the dog.
Save Me from the lion’s mouth
And from the horns of the wild oxen!”
(Psalm 22:16, 20-21a, NKJV).

Surrounded by his enemies set on devouring him, David’s Psalm telescopes into the future to the experience of another:

“They pierced My hands and My feet;
I can count all My bones.
They look and stare at Me.
They divide My garments among them, and for My clothing, they cast lots.
But You, O Lord, do not be far from Me;
O My Strength, hasten to help Me!”
(Psalm 22:16b-19)

David prophesies the suffering Jesus would experience for us. Jesus took on flesh, then surrendered his body to abuse so severe, it killed him. Why?

For the joy set before him.
To win us back for the One who calls us Beloved.
To betroth us as his own bride.
All at the highest cost imaginable.

The ultimate result of this deadly abuse was the victory over death itself; praise from the nations to the ends of the earth; the longings of the poor satisfied; eternal life for us.

You have answered Me.
I will declare Your name to My brethren;
In the midst of the assembly, I will praise You.
You who fear the Lord, praise Him!
All you descendants of Jacob, glorify Him,
And fear Him, all you offspring of Israel!
For He has not despised nor abhorred the affliction of the afflicted;
Nor has He hidden His face from Him;
But when He cried to Him, He heard.
I will pay My vows before those who fear Him.
The poor shall eat and be satisfied;
Those who seek Him will praise the Lord.
Let your heart live forever!
All the ends of the world
Shall remember and turn to the Lord,
And all the families of the nations
Shall worship before You.
For the kingdom is the Lord’s,
And He rules over the nations.
All the prosperous of the earth
Shall eat and worship;
All those who go down to the dust
Shall bow before Him,
Even he who cannot keep himself alive.
A posterity shall serve Him.
It will be recounted of the Lord to the next generation,
They will come and declare His righteousness to a people who will be born,
That He has done this.
(Psalm 22:21b-31, NKJV)

God turned the abuse that put Jesus in the grave into something so good—for Him, and us—that Jesus would not wish it away now, even though he did once pray, “If possible, let this cup pass from me.”

His sacrifice bought something so precious that he would not undo the trade—eternal nearness to Jesus himself, the deposit of the third person of the Godhead into our own bodies, the guarantee of eternal life that begins now and continues into Heaven.

God didn’t cause us to be abused. God is not abusive. But He can turn our abuse and all the harm another caused us into something good beyond our wildest dreams.

With it, He can purchase something so good that we wouldn’t wish it away later, not if it meant forfeiting the good thing he purchased for us!

“I consider that our present sufferings are not worth comparing with the glory that will be revealed in us.” (Romans 8:18, NIV)