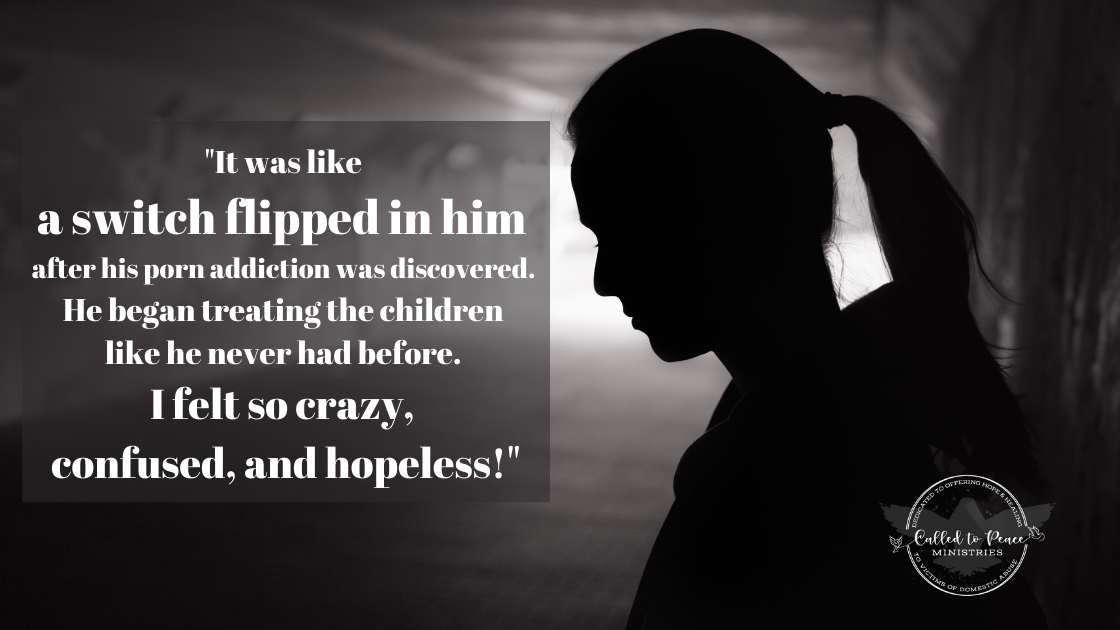 Meet Diamond! Diamond grew up as a homeschooled pastor’s daughter in a very conservative church. She was raised to be content to be a stay-at-home homeschooling mom.  That was the goal she was to pursue. Secondary education was not encouraged, although she did pursue an associate degree through distance education.

Diamond felt like she had no choices but to follow all of her parents’ rules, emphasizing, “I wasn’t allowed to live on my own because I was instructed, ‘it would be a sin to move out from under the umbrella of my dad’s protection until I was married.‘”

Then she met her soon to be husband, who bent over backward to woo her with a willingness to do whatever it took to earn her dad’s approval.  In her family culture, having the dad’s approval for marriage was law. Her family chaperoned their dates, and they didn’t hold hands or kiss till their wedding day. Diamond adds, “I felt loved and desired! He pursued me like no man ever had. I genuinely believed by following the stringent rules set up by my parents meant I would have a wonderful godly relationship as I was taught.” There were a few red flags in the dating relationship, but she was blinded to them with her naivety. A few incidents in his background were questionable, but he claimed other women had set him up for sin or falsely accused him. Looking back, Diamond now knows the red flags were not taking responsibility for his actions and deflecting the blame on others. He additionally used love-bombing, as he mirrored her and her interests to gain control of her- his supply.

One day in rage, he intentionally dropped a tool on their eight-year old’s head “to teach her a lesson.” Diamond was internally horrified. She didn’t show any reaction because she knew she needed to remain calm and not anger him further.

Diamond reached out to a Christian mentor who agreed to pray for her. She then reached out to a local domestic violence agency, and they validated that she was dealing with an abusive man. She states, “I knew it was an abusive relationship in my heart, but I needed that external validation and confirmation. I felt so crazy, confused, and hopeless!” She was a stay-at-home homeschooling mom to four little ones.  What was she to do?

Diamond finally got the courage up to leave when she realized the children’s lives were in danger. One day, her husband grabbed their son in anger, and her little boy cried out, “Daddy, please don’t kill me! Daddy, please don’t kill me!” Her husband relayed this message as a normal thing for a 6-year-old to say to his dad. At that moment, she realized she had to get out! It took her almost exactly two months from that day to get out.

Diamond discovered Called to Peace Ministries (CTPM) right before leaving as she was making an exit plan. She ordered Joy’s book, Called to Peace, and joined an online support group. “The support group became a wonderful sisterhood of courageous survivors who have encouraged me in my journey. We have shared our fears and highs and lows. We have prayed for and with each other, sharing praises as God miraculously answers prayers,” Diamond shares with sincere gratitude.

Her healing has been painful, describing it as “peeling back layers and layers of understanding how her childhood set her up for being an enabling, compliant, pacifist in my marriage.”

“I love how Joy has balanced, exposing emotional and verbal abuse using biblical principles. I’ve learned we are not called to suffer passively as victims, but to stand up with courage and expose the darkness that permeates abusers. I appreciate how Joy leads CTPM with grace and godliness. She is one of the older women I look up to as a long-distance mentor.”

Diamond concludes with, “Today, I no longer walk on eggshells. I have peace in my heart and my home. I don’t live in fear of my husband’s anger. I don’t fear coming home to find my children murdered in a rage. I am now free to live my life to please God. Life as a ‘single mom’ is emotionally and physically intense, but peace is worth it. God has called us to peace, and I’m so thankful for the ‘unspeakable peace’ he has given me.“