ONE Woman’s Journey from Oppression to Setting Others Free 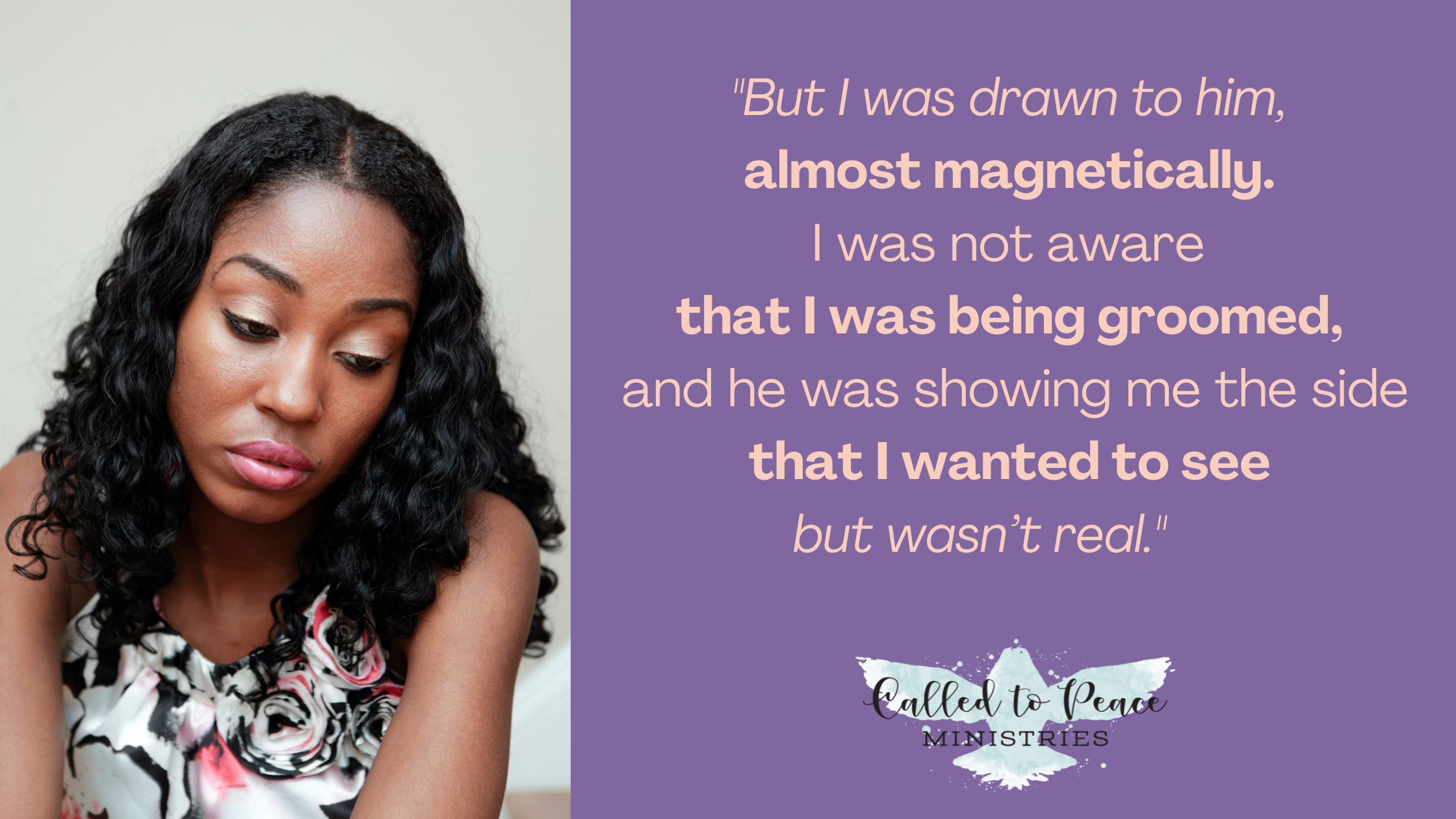 As told by “Keren,” and written by Lauren Rose

I was young and impressionable when I first met my husband, and he swept me off my feet. He convinced me that our love was a fairy tale’s love, and I believed that since he treated me like a princess, he was genuine. I didn’t take the time to get to know him.  I met him in December of 1999, and we were engaged in February 2000.  It was a shock to everyone—even to me. But I was drawn to him, almost magnetically. I was not aware that I was being groomed, and he was showing me the side that I wanted to see but wasn’t real.

He took me on “mini clothes shopping sprees,” but I wasn’t allowed to choose; it was only for clothes that made me look frumpier and plain. He was molding me into how he wanted me to look.

During our engagement, he got upset at me for voicing a different opinion. He took my plate from the kitchen table and dumped my entire meal into the trashcan. He told his son I was “yucky.” He approached me a few hours later, saying he was sorry and didn’t want me to leave him because that was his greatest fear.  He told me how his first wife had left him and kidnapped their son, and that’s why he was awarded primary custody. I believed he was sorry and was a victim of his circumstances, so I married him.

At the beginning of our marriage, I felt I was becoming less of myself and more of what he envisioned.While I still worked, he expected me to be at all his son’s events while he worked. He told me, “You better be better than his real mother is.” I was 23 and expected to be 100 percent on point at parenting while still working full time and managing all the household duties.

Five years later, when I was pregnant with our first child together, he forced me to quit my job, which I loved, to be a stay-at-home mom so that he could pursue his dreams and plans for our growing family. He isolated me even further. I was not allowed to attend ANY ministry opportunities with our church or any event that kept the children or me away from home. Then when we sat in church, he whispered degrading remarks in my ear during the service. Car rides to and from church (or anywhere) were further opportunities to humiliate me and point out my failures.

As the isolation grew, his control and anger towards me grew as well.

While I had not been physically bruised or bloodied, my spirit and soul were being crushed, and I didn’t recognize myself anymore. Nothing I did was enough as he continuously pushed me to try harder to satisfy him. He was vindictive with cruel punishments when I failed his expectations.

My response was ALWAYS to try harder. I tried everything I could think of, but nothing was satisfactory.  Then when he was seemingly satisfied, I’d drive myself crazy to get back to whatever it was I did to achieve that state. That’s the craziness of it all – there was no consistency, and I spiraled more under his control to please him.

My children were always on edge and distressed as they saw and heard how he treated me in front of them.

We began taking Christian marriage classes. After class, he would walk away feeling more empowered, and I left feeling more confused and defeated in my role as a wife.  I sought out wise counsel from women who had been married much longer than we had.  I was advised to “hang in there” or “just pray for him; be a praying wife.”  That left me feeling frustrated because I was “hanging in there” and praying. Then I would ask myself, “Hang on to what, exactly?” or “What do I need to pray about — that he hears me, hears Jesus, wakes up/snaps out of it, or all of the above?”

Then we tried marriage counseling. He was the one who said we needed to go in the first place because of my “behavior,” but when he was confronted for his behavior, he refused to go back.

When Called to Peace Ministries (CTPM) showed me The Power and Control Wheel for the first time, I knew that I wasn’t crazy and was on the right track for getting the help I needed.

It was not an easy escape, but I knew that I had to. I was literally trapped in her home because my husband took the car keys and monitored me. I created an escape plan. I remembered the Sodom and Gomorrah story where Lot’s wife looked back when they escaped.  I wasn’t going to go out like that.

I filled my backpack with as many things as I thought could be relevant – essential documents for the kids and me, my cell phone, and my wallet. I left with just the clothes on our back and went to a neighbor’s where I told her of the dark secret of the muck, I lived in. She took me to a domestic violence shelter, and I got help to escape permanently.

I was assigned a CTPM advocate to come alongside me and walk with me as I made some hard decisions.  I wasn’t judged but given grace as I processed through my storm. She listened. When she wasn’t available, I was assigned a support person to appear in court with me.

I joined a CTPM support group that helped me process through the aftermath of abuse. I’m still dealing with post-separation abuse in the court system, but I’m wiser and stronger now. CTPM also provided a scholarship to attend their He Makes All Thing New retreat this past May that was refreshing.

When CTPM came to my job (my church) and spoke to our staff about what the ministry does, Joy Forrest encouraged me to become a domestic violence advocate. CTPM provided a scholarship to their advocacy courses.

I felt inspired that I could use the pain I’ve been through to help other women.

My children have likewise had a great support system. They wouldn’t have been able to trust me if they saw me crumble under the weight of my circumstances. Laughter has returned to our home, and they know that I am at peace.

Today, I’m helping women in abuse through advocacy. My children seeing me overcome and help other women has been inspirational to them. Helping other women has helped me to become transparent in sharing my story.  It makes a difference talking to someone who has been through an identical situation and seeing what can happen on the other side.

I’m not clear of all my trials; however, I have seen how Jesus has captured my tears (yes, even the ugly cries!) and walked with my broken heart. “The locusts” took much—but God restored!

Advice to other women: Trust your gut. When you feel something is off, it probably is. Keep telling your story until someone listens – really, intently listens. Once you confirm you are in domestic abuse, set a course of action as to how you will break free from its ties. CTPM is a resource to help equip you with someone who will walk along with you.  You don’t have to go this alone, and it’s much better that you don’t.