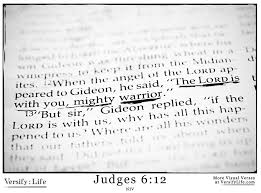 I love the story of Gideon. It amazes me that God was so patient with him. Like Moses he argued with God about his calling. Like Moses he saw only his limitations, but God proclaimed who he would be. We see things according to human limitations, God sees the limitless possibilities when we put our trust in him and walk in his Spirit. Gideon would question and test God numerous times before he became willing to step into the spiritual realities God pronounced over him. I love the following account in Judges 6. Gideon was sure the Lord had abandoned his people, but God…

And the angel of the Lord appeared to him and said to him, “The Lord is with you, O mighty man of valor. “ And Gideon said to him “Please sir if the Lord is with us, why then has all this happened to us? And where are all his wonderful deeds that our fathers recounted to us, saying, ’Did not the Lord bring us up from Egypt?’ But now the Lord has forsaken us and given us into the hand of Midian.” And the Lord turned to him and said, “Go in this might of yours and save Israel from the hand of Midian; do not I send you? And he said to him, “Please, Lord, how can I save Israel? Behold my clan is the weakest in Manasseh, and I am the least in my father’s house.” And the Lord said to him, “But I will be with you and you shall strike the Midianites as one man” (Ju. 6:12-16).

The Israelites were being oppressed by Midian because of their sin. The Midianites swarmed in against them and stripped the land like locusts every harvest season. Everything the children of Israel had worked for was stolen when they came. After seven years in this pattern scripture says that “Israel was brought very low… and the people of Israel cried out for help to the Lord.” It was basically the Lord’s compassion that answered, because nothing here says the people repented. They were just brought very low, and God had mercy. When he answers prayers it is rarely because of our worthiness. It’s more about him than us. When he answers, he comes in and empowers weak and reluctant people. Gideon remained reluctant until God showed up and proved himself to him. God did not say, “Go read the scripture, examine your sin, find my promises, and walk in obedience.” Instead, he answered every one of Gideon’s fear-based prayers, and he proclaimed something over Gideon that seemed completely removed from reality.

Reality was harsh. The enemy was devouring God’s people. The Israelites were hiding out in caves to escape with their lives. They were basically working for nothing, because everything they produced was stolen. The enemy was stronger that they were, yet God would not let them remain in defeat. When they cried out for help, he was faithful to answer, and to find a reluctant hero to lead the charge against the enemy. First he had to convince Gideon to take on the job, and of course that required answering his doubts and fears. Even after God answered, Gideon obeyed by tearing down the altar of Baal, but he was so afraid of his own family he did it at night. As God continued to prove himself to Gideon he soon began to live up to the angel’s description “mighty man of valor.” Before it was all over, God tested Gideon by reducing his troop size from 32,000 to 300. By this point, God had proven himself to Gideon, and he obeyed in spite of circumstances. It made no sense for a band of 300 to rise up against a huge army, but Gideon did it, because he had learned God was faithful.

This account is beautiful, because it shows me that God uses reluctant, weak people. It shows me that there are no limits with God—all things are possible. It shows me that as long as I am walking with him and willing, he will empower me in his strength. I can express my doubts and fears as long as I don’t run away. I need to wait and watch for his answer. God comes to the aid of the weak. He answers prayer, and he gives his power to the powerless. His reality seems far removed from circumstances and human logic, but nothing is more real! The One who created the universe can certainly turn a reluctant weakling into a mighty man of valor, as long as the man is willing.

Father, we face many impossible looking circumstances right now.  We ask you to show yourself to us, and answer our doubts even as you did for Gideon, because Lord you have great compassion on your children who are being downtrodden by the enemy. This is not about us, but about you, and we are willing to go and do whatever you call us to do. Regardless of our doubts, we will not run away in fear. Instead, we will be your mighty men and women of valor in spite of ourselves, because you will be with us. We will look to you rather than circumstances. We love and trust you. Amen