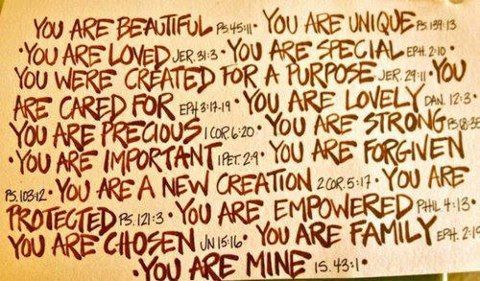 As I look back on my life, I realize that the most trying times have turned into the biggest spiritual triumphs for me, but I believe I could still be living in defeat if I had made different choices. It would have been easy for me to take on a victim mentality and remain stuck. As I was reading the first chapter of Ruth today, I recognized that all-too-familiar victim dynamic in Naomi. She had been through a long set of tragic circumstances, and when she returned to her hometown she was so bitter people barely recognized her. When they called her Naomi (which means pleasantness), she corrected everyone and told them to call her Mara (which means bitterness). Naomi defined herself as a victim.

When Naomi realized that Ruth was determined to go with her, she stopped urging her. So the two women went on until they came to Bethlehem. When they arrived in Bethlehem, the whole town was stirred because of them, and the women exclaimed, “Can this be Naomi?” “Don’t call me Naomi, ” she told them. “Call me Mara, because the Almighty has made my life very bitter. I went away full, but the LORD has brought me back empty. Why call me Naomi? The LORD has afflicted me; the Almighty has brought misfortune upon me.” So Naomi returned from Moab accompanied by Ruth the Moabitess, her daughter-in-law, arriving in Bethlehem as the barley harvest was beginning (Ruth 1:18-22).

Isn’t it interesting that Naomi wanted to be defined by her circumstances? Rather than choosing to cling to her faith in God as Job did when he lost everything (Job. 13:15), she chose to make tragedy her identity. Ruth had also suffered loss, but she chose to love God and love others. She took action and did not profess bitterness as Naomi did. I love the way this passage ends. Naomi and Ruth arrived in Bethlehem just as the barley harvest was beginning. Hopeless and bitter Naomi was too consumed with her pain to see that God was at work, but Ruth took action. She walked in the little provision afforded her by the law, and arrived just in time to do it.  As a result, God blessed her by sending her to the field of the very person who could change their circumstances—their kinsman redeemer.

Without Ruth, Naomi could have very likely perished in her bitterness. At the end of this story the women of Bethlehem said to Naomi, “Praise the Lord, who has not left you without a family redeemer. May his name become well known in Israel. He will renew your life and sustain you in your old age. Indeed, your daughter-in-law, who loves you and is better to you than seven sons, had given birth to him.” (Ru. 4:14-15) Boaz and Ruth’s child did become well known in Israel. Through his line would come both King David and our Messiah. Truly Ruth was better than seven sons, because she did not allow her circumstances to define her. She chose to follow God, and to love others. As a result, history was changed forever.

We all have tragedy and unpleasant circumstances at some point, but we also all have choices. We can choose to be defined by our circumstances, or we can look for God’s provision in the midst of it. We can choose to follow God and love others, or we can choose to be bitter and self-centered. Our choices will determine the outcome. God will make a way for those who refuse to allow calamity to define their lives. Our Lord always has redemptive purposes in mind for those who love him and are called by him (Rom. 8:28). Our job is to simply choose to believe and follow him daily. Those who belong to him are his heirs (Gal. 3:29). That is who we are, and that is how we are defined. Circumstances do not define us, unless we choose to let them. All things are possible to those who believe (Mk. 9:23). Will you choose to believe?