The Self-Righteous Narrative of Abuse 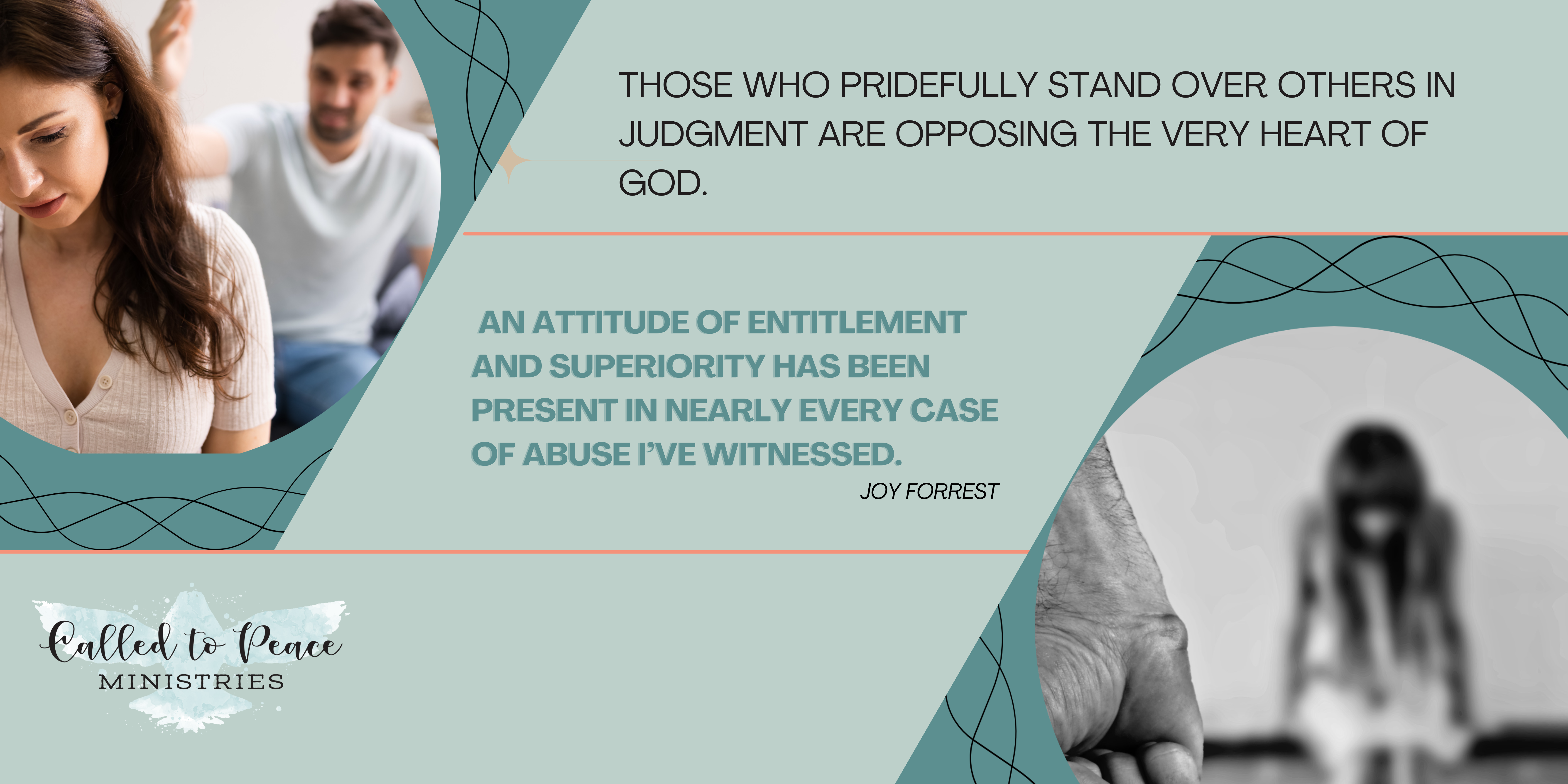 Perhaps in recent years you’ve noticed that a mean spirit has become pervasive in our culture. It’s most apparent on social media where anybody, and everybody, can express their opinions loudly and publicly without regard for others. It has not only become acceptable, but even popular, to stand over others in judgment, and to be outraged at those with different opinions.

Some say that social media has given rise to this new, culturally acceptable cruelty, but I believe it is as old as Adam. Scripture is filled with accounts of people blaming others for what has gone wrong in the world, beginning with the Garden of Eden, and culminating with the religious leaders who sent Jesus to the cross. It is a dynamic I see daily in my work with victims of domestic abuse. I call it the self-righteous narrative of abuse.

People who hurt, misuse, and condemn others almost always couch their cruelty in self-righteous language.

They twist the truth to make themselves look good, and they do it at the expense of others. Like Adam, they blame their partners for their bad behavior, and like the Pharisees, they create pious narratives and attack anyone who disagrees with them.

In fact, I believe that the religious leaders of Jesus’ time perfectly demonstrated the abusive mindset. They acted as if they were never wrong and anyone who disagreed with them deserved to be attacked. They set traps to “catch Jesus in his words” (Mark 12:13). They flattered him in order to set him up to be condemned (Mark 12:14). They pretended to be interested in what he had to say, but their interactions with him were only attempts to gain and maintain power. They needed to be admired and in control, and they would stop at nothing, not even murder, to maintain that control. Over the past two and a half decades, I have seen such desperate attempts to maintain power play out in oppressive marriages multitudes of times.

When an abusive man feels his control over his wife is threatened, he will do anything to regain it. Usually, this involves creating a righteous narrative that demeans her, and often destroys her reputation.

It’s not uncommon to hear a perpetrator of abuse make false claims about his wife, such as, “she had an affair,” “she’s abusive to me and the children,” “she’s mentally ill and unstable,” or “she isn’t submissive.” Quite often men like this are guilty of the very charges they devise to destroy their wives. Yet, in public they play the role of sincere Christians who seem so concerned about their families that people often sympathize with them instead of the ones they have harmed.

The bottom line is that abusers, just like the Pharisees, justify themselves and stand over their partners in judgment, often citing scripture as they do it.

You might think that people with this mindset would feel convicted about their words and actions, but in most cases, you would be wrong. In his book, Why Does He Do That? Inside the Minds of Angry and Controlling Men[i], Lundy Bancroft suggests that “An abuser almost never does anything that he himself considers morally unacceptable. He may hide what he does because he thinks other people would disagree with it, but he feels justified inside.”

There was no indication in scripture that the Pharisees ever felt anything but justified in their actions towards Jesus. In the same way, an attitude of entitlement and superiority has been present in nearly every case of abuse I’ve witnessed. It’s not always evident to those looking in from the outside, but victims know it well. They understand how skillfully their abusers twist truth with lies to promote their own selfish agendas. Most tell me it’s so convincing that they start questioning themselves and taking responsibility for the abuse they’ve endured. I imagine that was the Pharisees’ intention when they tried to trap Jesus in his words time and time again, but he knew who he was and could not be manipulated.

To some who were confident of their own righteousness and looked down on everyone else, Jesus told this parable: “Two men went up to the temple to pray, one a Pharisee and the other a tax collector. The Pharisee stood by himself and prayed: ‘God, I thank you that I am not like other people—robbers, evildoers, adulterers—or even like this tax collector. I fast twice a week and give a tenth of all I get.’ “But the tax collector stood at a distance. He would not even look up to heaven, but beat his breast and said, ‘God, have mercy on me, a sinner.’ “I tell you that this man, rather than the other, went home justified before God. For all those who exalt themselves will be humbled, and those who humble themselves will be exalted.”

When we believe we are superior to others and judge them anytime they disagree with us or don’t live according to our preferences, we are walking on shaky ground.

God resists the proud but gives grace to the humble (James 4:6), and those who pridefully stand over others in judgment are opposing the very heart of God. “Like the wicked man in Psalm 1, the abusive husband’s “chaff-like” behavior is driven by a heart of pride and self-worship. Inflated by his sense of self-importance the abuser demands conformity and will use anything at his disposal to get it.”[ii]

This self-importance is the worst of all sins, because proud and haughty people usurp the honor and authority that belongs solely to our God. They may flourish for a season, but our God promises that one day they will be judged in the same way they judged others (Mt. 7:2). “All those who are arrogant are an abomination to the Lord; be assured, they will not go unpunished” (Proverbs 16:5). Anyone who proudly stand over others in judgment should take note. “A man’s pride will bring him low, but the humble in spirit will retain honor” (Proverbs 29:23).

Lord God, self-righteousness, and abuse are rampant in this world. We ask you to heal our land and heal our families We know that you oppose the proud and too many of us are too proud— too self-important. Your Word tells us that if your people will humble themselves and pray and seek your face and turn from their wicked ways, you will hear from heaven, forgive their sin, and bring healing. God, as a people, we need your healing. We ask you to have mercy on us. Give us hearts to care for the oppressed and needy.  Replace pride with humility, cruelty with gentleness, and oppression with justice. We pray this in Jesus’ precious name. Amen

[ii] Moles, Chris. The Heart of Domestic Abuse: Gospel Solutions for Men who use Control and Violence in the Home (p. 36). Focus Publishing. Kindle Edition.