“Serena” Finds Peace by Stepping into the Truth 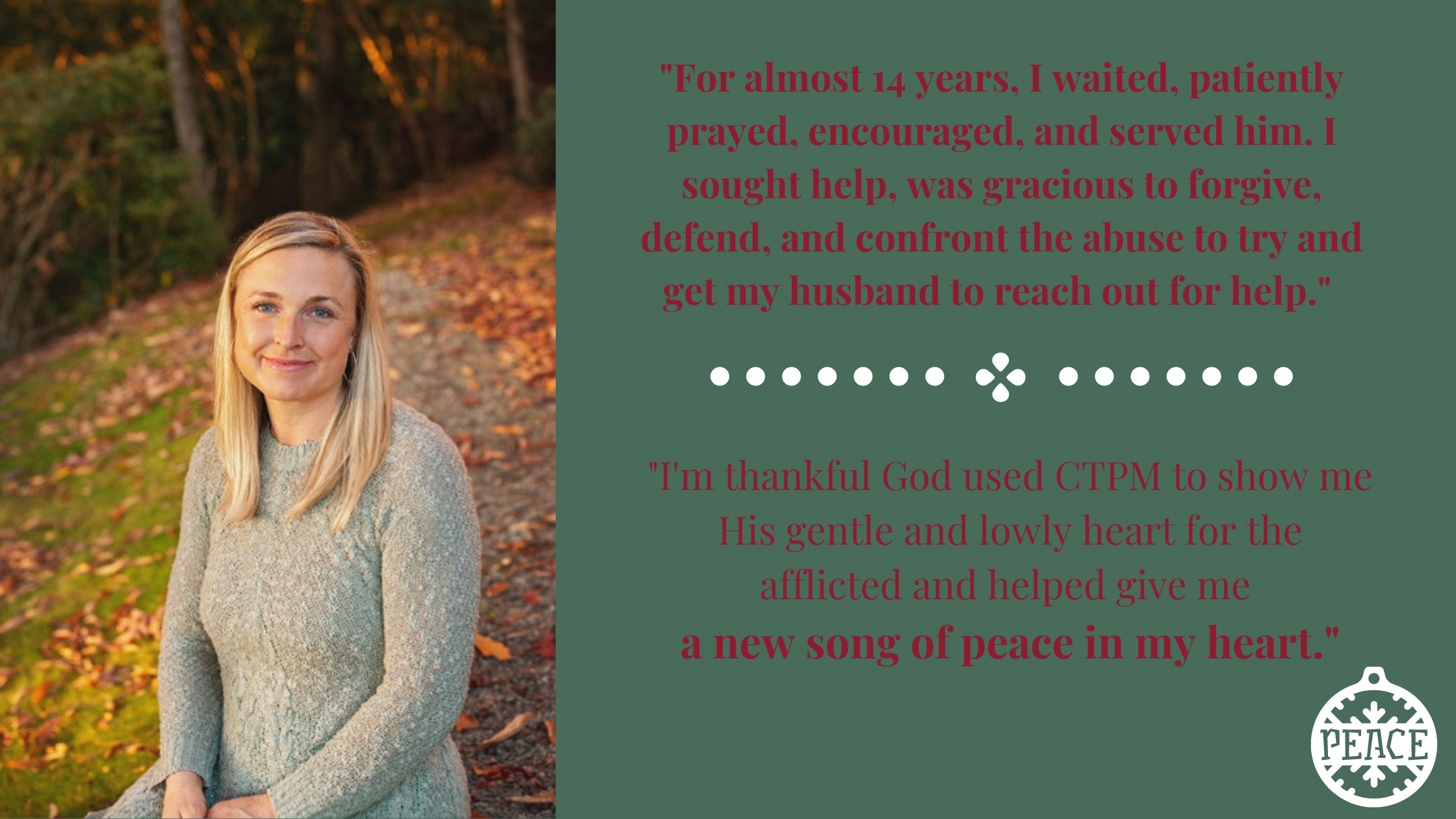 As told by “Serena,” written by Lauren Rose

My husband and I had a short dating and engagement period before marriage, a total of nearly a year. During that year, I noticed a few red flags – jealousy, control over friendships, a lack of empathy, and communication problems that resulted in him giving me the silent treatment. I was in denial of the red flags, while my family and friends encouraged me to postpone the marriage and get counseling to work on some of the concerns I saw.

When I brought up any of my concerns to him, he dismissed them, showered me with handmade gifts, and sent handwritten love letters, making it harder for me to identify (or believe) that unhealthy patterns were a concern. He could be incredibly charming when he wanted, and I assumed all our “problems” would work out once married.

On our honeymoon, I started noticing my husband’s quick temper and anger surface more. Shortly after marriage, he began to abuse me both emotionally and verbally. He started calling me demeaning names, bringing up my past, and using my past sins as a weapon against me. Somehow, he always felt justified in his actions. Our first year of marriage was tough and challenging, as jealousy, coercive control, and isolation escalated—especially when we differed in opinions, or I didn’t do what he wanted.

After becoming pregnant with our first child, the violence increased as my focus moved from him alone to preparing for our child. During my pregnancy, I found him looking at pornography. I confronted him, and he started throwing objects at me.

My husband was also a combat veteran. He was diagnosed with PTS(D), and I assumed this was why he took his anger and stress out on me through emotional and physical abuse.

I tried to stop the abuse by bringing it to my husband’s attention and letting him know how deeply he had hurt me. I told him that I had forgiven him but needed him to get help and stop the abuse.

I sought help from two different pastors, following the Matthew 18 conflict process, and received counsel to be more submissive, win my husband without a word with a gentle and quiet spirit, continue to pray, fast, and ask his forgiveness when he abused me. My pastors offered us marriage counseling, seeing our problems as a marital conflict, and indicating that I was at fault for not submitting to my husband. The counsel we received made my situation worse because it reinforced my husband’s claim that I was not respectful and submissive in everything he wanted. He used any marital counseling or rebuke the pastors gave me during our counseling as ammunition against me later.

By default, I continued to reach out to my pastors for help, staying in the 2nd process of Matthew 18 for over a decade while my pastors never took it further to protect my children and me. I desired to please my pastors and tried to follow all their counsel. As I did, the abuse continued to escalate in frequency and severity.

One of the pastors did support us in separating but discouraged me from getting counseling outside of him or his wife. His wife counseled me that my disrespectful attitude and not submitting to my husband worsened our marriage problems.

My pastor discouraged me from calling law enforcement after my husband was physically violent with me, reminding me that reaching out to the law could go on my husband’s record.

The night I fled to my pastor’s house with my children, after being threatened with a loaded gun, he told me to call my husband out of respect to let him know where I was.

I separated from my husband a total of eight times in almost 14 years, usually for six weeks to four months before returning.

My husband reached out to my pastor for help each time I separated from him. He stayed “accountable” to him or at least checked all the boxes I wanted to see before I’d reconcile with him. Then two to three months after I moved back in, the abuse and coercive control would surface until I was forced to leave again. I believed I had to keep returning to my husband at all costs and not break up the family since we had several children together.

For almost 14 years, I tried to wait patiently, pray, encourage, serve him, seek help, be gracious, forgive, defend, and confront the abuse to try and get my husband to reach out for help.

After trying everything with no improvement, I finally took our children, obtained a protective order, and left for good. The older ones suffer from the effects of growing up in a home with domestic abuse and are currently healing from trauma, depression, anxiety, anger, and low self-confidence and self-worth.

During my marriage, two faithful friends walked alongside me, supporting, caring, helping me each step, as I finally took the final step to end the cycle of violence. One of these friends helped me find a biblical counselor who understood abuse and introduced me to a Called to Peace Ministries (CTPM) advocate. My counselor also helped me find a supportive church where I could be protected and well cared for by pastors who understood the dynamics of abuse. My new pastor helped me get a safety plan and encouraged me to obtain a protective order and separate. I know now that my former pastors lacked understanding of domestic abuse and saw it as a marriage problem instead of a problem with coercive control.

CTPM resources and website helped me find the necessary tools to aid in my healing and helped me understand the dynamics of domestic abuse. These resources have assisted my recovery in every way through the ongoing, supportive programs they offer.

I read Joy Forrest’s book, Called to Peace: A Survivors Guide to Finding Peace and Healing After Domestic Abuse, worked through it with a friend and went through it again in a CTPM support group. It brought so much hope and healing from the impacts of domestic abuse and helped me recover from how my husband spiritually abused me. My faith in God was restored, and I began to see myself through His eyes of grace and compassion again as His beloved daughter.

CTPM helped me heal spiritually by gently reminding me repeatedly of the Lord’s goodness, that God is for me, not against me, and to dwell and meditate on His truth, making God bigger than any of the trials I faced. CTPM provided me with specific scriptures to meditate on and helped me turn those into prayers of lament to help heal my broken and crushed spirit from the ongoing stress of living in an oppressive marriage. CTPM also helped me learn how to respond biblically to oppression, reminding me that forgiveness and trust are two separate things. I’m thankful God used CTPM to show me His gentle and lowly heart for the afflicted and helped give me a new song of peace in my heart.

My CTPM affiliated advocate took time to listen, support me, and help me take steps towards fleeing from my abusive spouse, getting a protective order, and making a safety plan. I have felt seen, heard, and understood at CTPM and not judged or shamed.

I am currently enrolled in CTPM’s year-long faith-based advocacy training. The training has helped aid in my healing in multiple ways. The courses offered have helped me understand how to help my children heal from the trauma of living in an abusive home. It has also helped me understand many of the lies and unhealthy belief systems I believed that kept me trapped in my marriage for as long as it did. I continue to single parent, my children, helping them recover from their trauma while healing from my own.

I hope to someday start a CTPM support group in my church or community and become a CTPM affiliated advocate in God’s timing, helping other women find hope and healing that I have found.

God continues to reveal His heart for me, and I pray He will one day use the pain I’ve walked through for His good purposes.  I am so thankful God has called me out of violence into peace, and I can finally find rest from the oppression I endured for so many years.

Called to Peace Ministries was the literal hands, heart, and feet of Christ to show me His great love and His compassion for those who suffer oppression as I did.

My advice to a woman in an abusive marriage: I would remind her of God’s heart for her and His hatred of the oppression she has endured. I would let her know that she is not alone, and the abuse is never her fault. I would offer her support through the resources CTPM offers, and I would share how CTPM brought truth and light into the darkness I lived in for so long. “And there truly is no pit deeper, where God’s love isn’t deeper,” Corrie ten Boom.