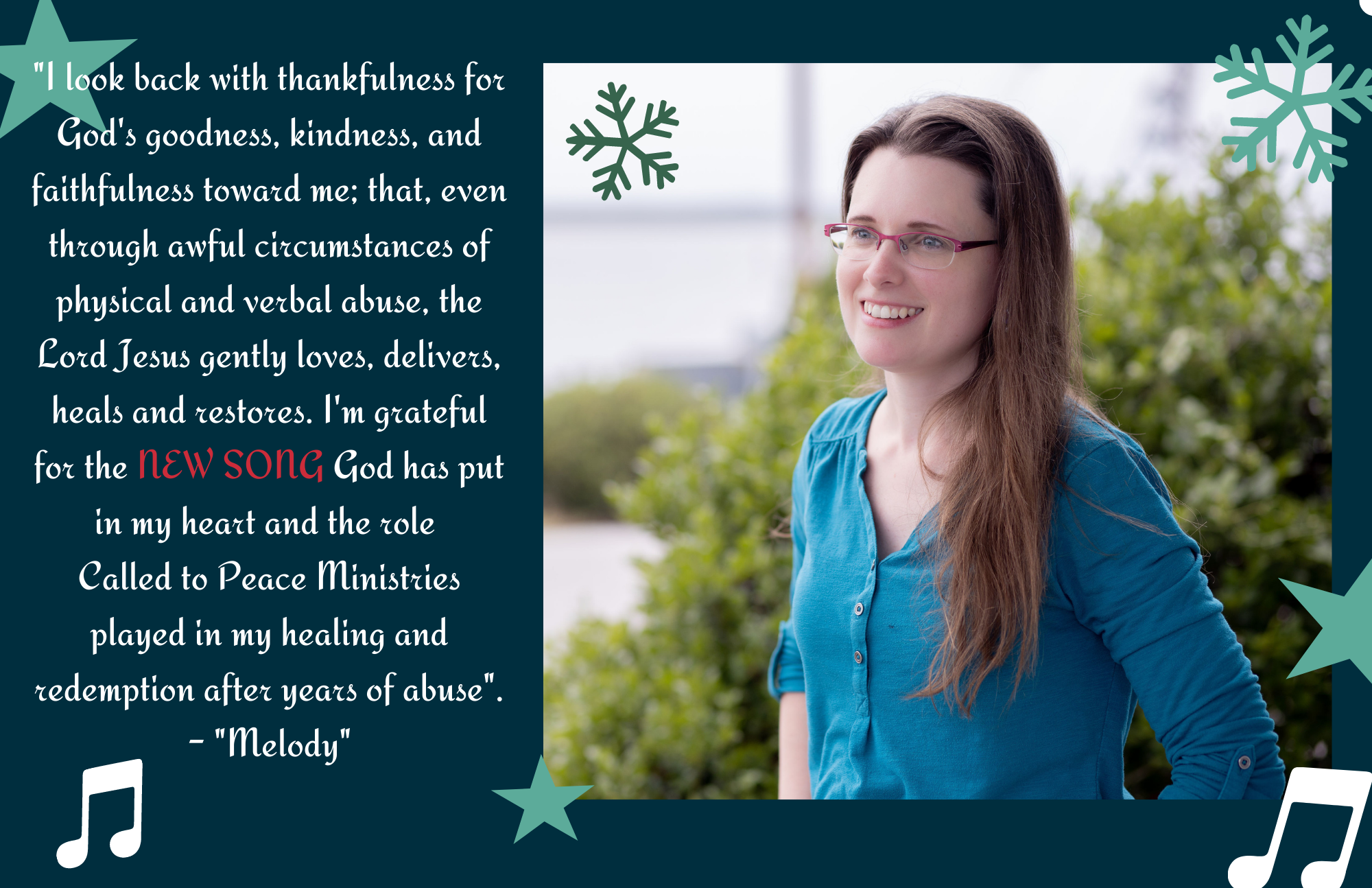 This year I celebrated my 40th birthday full of joy and gratitude! The day marked a milestone for me in reaching goals that seemed unattainable not so long ago. I am a survivor of domestic abuse; yet, through the love and support of many people, including Called to Peace Ministries, I have experienced tremendous healing and freedom – a new life, a new song!

I was raised in the church among a culture of conservative Christian homeschoolers. At 16, I began community college classes with my sights on a music degree and spent much of my time at the piano. Several years later, I won a Young Artist’s Competition and had the thrilling experience of performing with our city’s symphony orchestra. This dream came true for me; however, my music dreams were soon buried by a nightmare relationship!

I began dating a guy at church when I was 19. Within six months, he had convinced me that it was God’s will for us to be engaged and married as soon as possible. Enamored by his profound interest in me and seeing the extensive Christian ministry and business he had started online, I fell for his sweet words.

It wasn’t until after the wedding that I realized the guy I married wasn’t Christ-centered at all, as he claimed. Prone to rage, eccentric behaviors, and coercive control, his abuse created a confusing rollercoaster of intense proportions as it grew from its subtle beginnings to completely overt abuse. I didn’t yet have the frame of reference or terminology to define abuse, but it was all there: Lies and deceit. Mind games. Irresponsibility. Manipulation. Addiction. Unfaithfulness and lust. Neglect. Religious veneer. Micro-control. Rage and threats. Feigned repentance. Bait and switch. Blame and shame.

We moved away to another state, isolating us further from family, friends, and church. My spouse hampered my efforts to find a church community, instead starting a “home church;” with a small cult-like following and teaching out of the Bible as he saw fit. Some of his ideologies were quite disturbing to me even then. I was not allowed to disagree with him, and whenever I did stand up to him, there was a price to pay. He seemed to intentionally go against my needs, wishes, or opinions to feel in control.

Bound by my beliefs that divorce was never an option, and I just needed to be a better wife, I adapted to my crazy reality in order to mitigate and survive my spouse’s drama. Giving in to him temporarily pacified him, but ultimately things just got worse. He prevented me from returning to my music education, requiring me to work full time in his home business while he slept all day and stayed up all night. Even while pregnant or nursing, I was given no maternity leave and rarely had a break from his oppressive control and business demands.

Over time, my health began to suffer. I was chronically fatigued from the stress of working customer service, raising four children, and watching my back from my spouse’s verbal abuse and intermittent physical assaults.

It was in that season, at rock bottom, that I stumbled upon Psalms 16:11:

“You will show me the path of life; in Your presence is fullness of joy; at Your right hand are pleasures forevermore.”

I clung to that verse like a lifeline, telling God that He had to show me the Path of Life because I couldn’t find it. I knew there had to be a better way! I found Called to Peace Ministries (CTPM) through a web search; I found stories of other women who had been through similar situations and was amazed to realize I wasn’t alone! I discovered online resources, which helped me make sense of my confusing and cyclical experiences. I learned how my abuser’s behavior was rooted in his core beliefs regarding male superiority, entitlement, privilege, and control. I realized he was choosing to behave the way he did with no intention of changing and that even his “nice;” times were part of the abuse cycle to keep me hooked! The lights of hope and clarity started to come on – I had options! I began to take baby steps toward freedom.

I was elated to join one of the CTPM support groups near me. Joy Forrest was in the process of writing her book and study guide for groups. I found healing in the weekly lessons, which encouraged me to look at Scripture through the lens of God’s love for the brokenhearted. I unraveled lies I had believed and took to heart that God deeply cares for me. I remembered that genuine love is patient and kind. Every week I left the group feeling more inspired to do my part to grow and heal.

Once the worst of the pain and grief had passed, I discovered a new sense of peace, joy, and freedom. Not bound by the whims of my abuser anymore, I made decisions that benefit my health and nurtured my emotional well-being. I participated in ladies’; retreats and conferences hosted by CTPM. My music dreams revived; I began teaching piano lessons and writing songs again. I worked through an online music degree program, finally completing my bachelor’s degree.

I look back with thankfulness for God’s goodness, kindness, and faithfulness toward me; that, even though awful circumstances, the Lord Jesus gently loves, delivers, heals, restores, leads, and cares for His sheep. I am incredibly thankful for the role Called to Peace Ministries played in my story, and I wholeheartedly support their mission. I’m grateful for the new song God has put in my heart and the role CTPM played in that to give me a new song of redemption and to pursue my music dream, but with a greater purpose and passion than before.