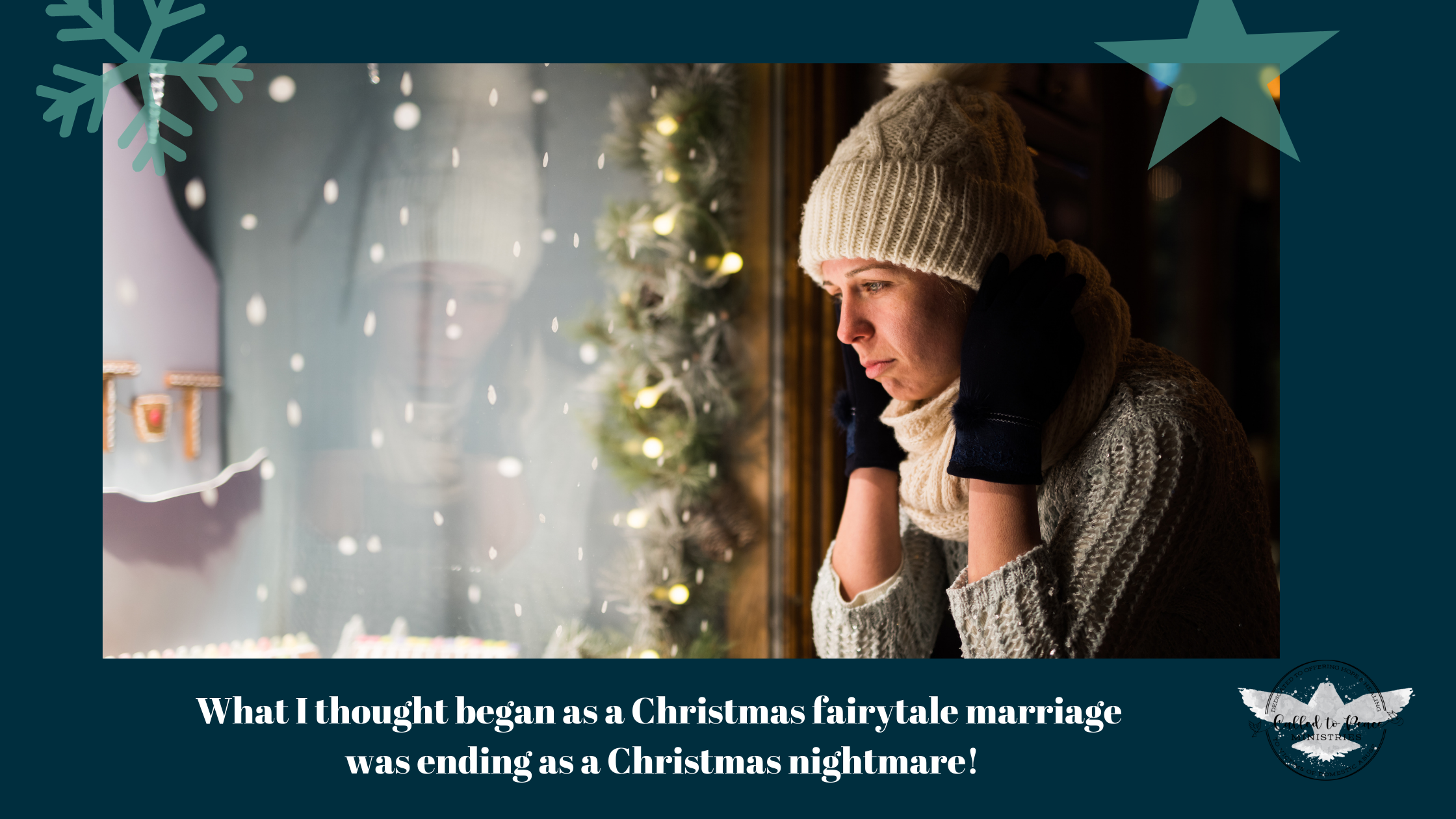 I have always enjoyed the holiday season and dreamed of a Christmas wedding since I was a child. My childhood wish came true in December of 2015 when I had a Christmas wedding. The Christmas we got married was like a fairytale! My husband was incredibly supportive, and I thought I had hit the jackpot when it came to a beautiful Christian marriage. But by January, what I thought began as a Christmas fairytale marriage was ending as a Christmas nightmare. My husband’s “anger issues” became apparent, but I made excuses because he was a preacher, so “truly he had a good heart.”

For Christmas 2016, I was allotted a small amount of money to spend on gifts. Santa and any other secular decorations were deemed inappropriate because we lived in the parsonage, and “it wasn’t a good look,” my husband would say. In the beginning, I truly believed I was the problem and tried every self-help book and marriage book I could find, hoping to turn my marriage back into the Christmas fairytale it had started as, out of the nightmare of abuse I was trapped in. That Christmas, my parents got us one household gift together. Once everyone was gone, my husband got angry, claiming he got nothing from my parents.

By the holiday season of 2018, the abuse had escalated, and I was a shell of who I once was. I was always nervous and on eggshells waiting on the next explosion. The night before Thanksgiving, a car rode by our home and blew the horn. My husband decided it was somebody I was cheating with. It turned volatile; he threw me around the house and down the steps as I fled out the back door! The next morning, he ignored me and left me at home alone while he went to his parents. His mom called and told me to come over; he texted me, “I better not make a scene.” He then blamed me and said I was faking the next few days when I was sore from his physical aggression.

By Christmas, I had so much anxiety over going to my parents and trying to make sure everybody acknowledged my husband so I wouldn’t be punished for it. We each got a small gift and one together gift as we had every year; of course, he got angry and threw the gift my mom brought him away because he felt ignored. The next few days consisted of silent treatment. One night, he started accusing me of cheating again. He became physically explosive and attempted to kill me; when I confronted him, his response was, “If I wanted to kill you, you would be dead.” Every Sunday, my husband stood in the pulpit and delivered the most amazing sermons. He appeared to be the most loving, caring Christian man outside of our home.

When I left for the last time, a friend of mine introduced me to Joy and Called to Peace Ministries (CTPM). I thought because I was a preacher’s wife, I would be a rarity. I quickly met many other preacher’s wives and found I was not alone in the pastor’s wives who experience abuse. I learned that I was not the problem causing his abuse of me, as my husband had tried to make me believe.

CTPM gave me a circle of friends that understand the struggles of life from surviving domestic abuse. They did not judge; they give advice when asked, gave a listening ear when what I had to express would sound crazy to an outsider who hadn’t experienced domestic abuse, providing a safe space to be vulnerable. CTPM gave me the strength and support to remain separated unless I saw a real genuine, consistent change in my husband for an extended period. This group has taught me of God’s unfailing love that extends beyond anything I had understood before. I feel blessed to be part of such a loving, caring group of women.

Last year, Christmas was difficult with no joy or hope. I cried a lot! This year at Christmas, I feel free! Free to enjoy the little things like decorating way too early and listening to Christmas music all day, if I want to. The Lord has provided for me and comforted me deeply during my separation from my husband. I’m finding joy in the little things again! I would advise all women going through a separation from abuse, especially during Christmas, spend time alone with God and don’t rush the healing process. Outsiders may think it should be easy to walk away, but it isn’t. Allow the Holy Spirit to guide your steps and heal your heart! He is a healer, redeemer, peace, and our true joy – every day and at Christmas – as we celebrate the gift of His life that gave us this abundant life!