“Katie” Discovers the Gift of Genuine “Healing” After Domestic Abuse 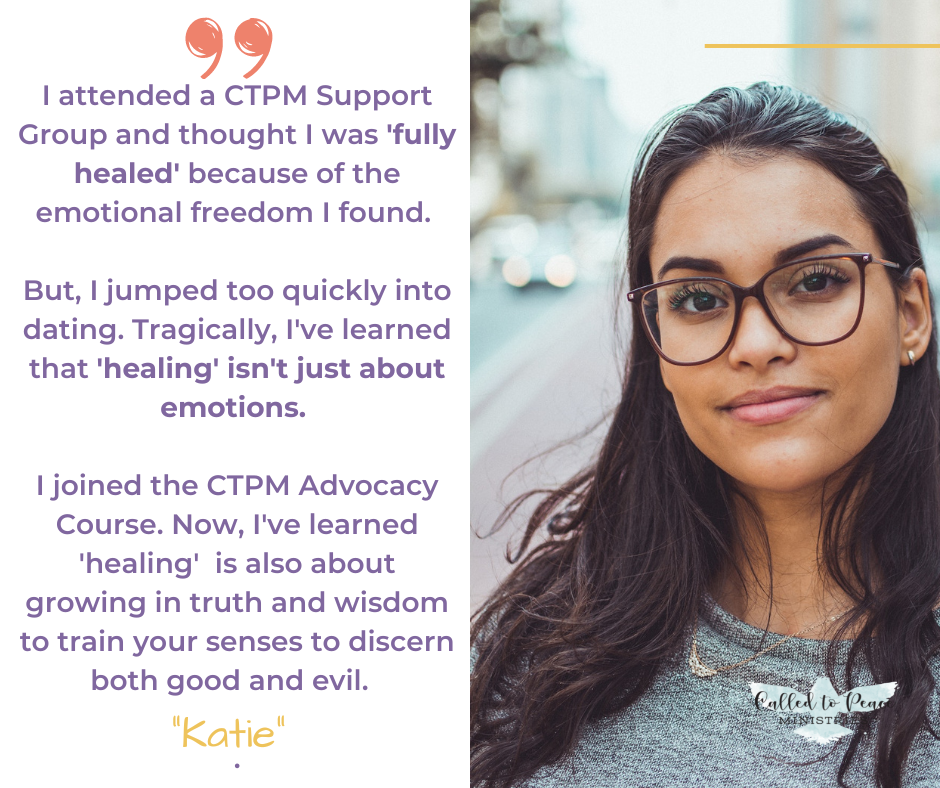 As told by “Katie,” written by Lauren Rose

The year before my marriage, God brought me to a place of self-examination where I realized I wasn’t as Christian as I thought. I surrendered my life fully to Christ, and my life changed tremendously. There is much more to my story, including growing up in an abusive home, but I’ll leave that for another time. I now believe that also contributed to my ending up in two domestically abusive marriages. Since I found Called to Peace Ministries attended their Support Group and began taking their Advocacy Course, I’m genuinely healing and understanding the dynamics of abuse.

In January 2015, I met my former husband online. I was impressed by his desire to have a godly marriage. He agreed with all the marriage counseling we received from my pastor. He had a lot of biblical knowledge. It appeared we had the same beliefs, desires, and wants.

While dating he would share excellent marriage sermons from great pastors I liked. He was friendly, polite, funny, laid back, reserved, and a little shy.

We’d been dating for a few months when he proposed. I said yes and we decided to marry in May of that year.

After our marriage, things seemed off right away. Over time, some of those “not-quite-right” things included:

Three weeks into our marriage, he told me he wanted a divorce. He told me he had made a mistake, didn’t “feel” in love with me, and missed his close friend, Debbie.

I reached out to a mature sister in Christ for help. She encouraged me to fight for our marriage, reminding me the enemy is working to destroy marriages. I fought for our relationship, and my husband seemed to be on board.

When I started to address problems, he said he was sorry and wanted to work on it, but then blamed me for our problems. He came up with many excuses for why he was struggling to be married to me but never talked about his responsibility in the marriage.

I began to ask God to reveal the truth, and throughout our marriage, I continued to discover more lies and things he was hiding.

As things got worse, I reached out for help. I went to see our pastor and his wife. My husband didn’t want to go. I reached out to multiple mentors from our past, and my husband would refuse to talk to them or receive help. He then left the church we were attending.

He became even more controlling with money and major decisions. He tried to control what I wore, ate, could do, and how I could talk. I was not allowed to become a church member without his permission, which he never gave.

He would block me from leaving rooms or closing doors when angry. He would yell at me for hours. He never hit me, but he was unpredictable.

I often felt like I wouldn’t be surprised if he tried to kill me.

I remember daily crying out to the Lord in tears for guidance. I didn’t want to get divorced if it was wrong, but God led me to get out.

Things didn’t get better. Things escalated to a point that through a series of events, I was granted a three-year restraining order.

During this same time, a close friend reached out to me. She was a part of Called to Peace Ministries (CTPM) and told me about CTPM. I reached out and was placed with a Support Group where together, we went through the workbook together.

I attended a CTPM Support Group and found emotional and spiritual healing. I felt more at peace.

I thought I was ‘fully healed’ because of the work I did there. But, I eagerly jumped too quickly into dating. I wanted to be in a relationship and didn’t want to take the time to go through the complete healing process. I ended up in a second abusive marriage that was even more abusive than my first.

I contacted CTPM again for help and was met with kindness, empathy, and assistance. I joined the CTPM Advocacy Classes.

Now, I’ve learned that ‘healing’ isn’t just about emotions. It’s also about growing in truth and wisdom to train your senses to discern both good and evil (Hebrews 5:14).

Through these classes I truly started to understand what I went through and am going through now. I’ve been able to grieve, release, and truly heal. Unfortunately, I learned this after getting married again, but the truth in these classes has been an enormous blessing to me during this challenging time. I am also continuing to grow in spiritual wisdom and understanding of who God is and His truth so that I can see the enemy’s lies more clearly.

I can honestly rejoice in the Lord, even in this valley, because my hope, salvation, and security are in Him. God is using my trials and suffering for my good by growing me in Christ-likeness to persevere and depend entirely on God.

Like most stories, mine is complicated, but I can always see God working in the details. I’m grateful to be taking the time now to go through the complete healing process with CTPM.

“Katie” is now on her way to be a Volunteer Affiliated Advocate for CTPM to help other women discern between good and evil.

Will you join her?