He’d be Crucified in the Blogs 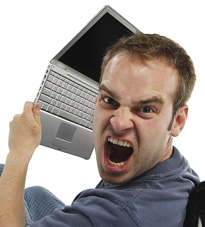 Some days I just get weary of life in the 21st century American church. Yes, I am a part of it, and yes it does many good things.  When I walk through the halls at my church, I see lives that have been radically transformed, marriages that have been saved, and I hear messages that proclaim God’s unchanging truth. When I look at disasters in our world, I am always blessed by how the church rises up to help victims. However, when I look at the American church as a whole I sometimes get a little nauseated. It brings a whole new meaning to Jesus’ words about spewing the lukewarm Laodicean church out of his mouth (Rev. 3:). In fact, in the Greek, that word literally means vomit.  The church is supposed to be salt and light not curdled milk!

Is it just me, or do others have that same queasy feeling about our modern church? Between the television preachers who promote a feel good, self-centered gospel to the Christian bloggers who take issue with just about everyone in ministry, I find myself ready to spew. It seems we can’t find a balance between judging and condoning self-serving doctrines.  I guess that is what lukewarm is all about—having no passion for God and people, but only for our own interests. Pride fuels one extreme and selfishness the other. I often wonder what would happen if Jesus showed up in America today. I feel quite sure many who claim his name would reject him. The prosperity sect would be drawn to the miracles, but later appalled at his teaching on self-denial. They probably wouldn’t even bother to debate him. They’d be too busy confessing their next blessing. It would be the self-righteous, faultfinding bloggers who would crucify Him this time around, except this time it would be done with words.

I can only imagine the uproar He would create in the blogosphere! Here are just a few blog posts we might see. “We find it hard to endorse this man, because he clearly does not live a lifestyle that is ‘above reproach.’ He not only violated the unspoken rules about spending time alone with a woman, but he did it with a divorcee who was living in an adulterous relationship in Samaria. Then there was the sinful woman who crashed a religious discussion group by clinging to him, kissing his feet and washing them with her tears. He didn’t even bother rebuking her for her inappropriate physical contact.” “Masses are lining up to be touched by this self-proclaimed faith healer. We believe he has planted actors in the crowds to build the mass hysteria.” “We are told there are several uninformed women footing the bill for his ministry.” “He is a wine bibber and constantly questions century old traditions passed down from the church fathers.” “He travels with a group of women (one of them a known prostitute), and spends a great deal of time hanging out with prostitutes, drug addicts and the like. It’s one thing to minister to such people, but he apparently prefers their company.”  “Apparently, he disagrees with many widely accepted interpretations of Scripture.” “We consider this man a false teacher.”

I believe if Jesus came and established a ministry on earth today, He would have many followers, but I also believe he would meet criticism on all sides. Since He always seemed to honor individuals over institutions, I am sure that would happen again. In his day, He clearly broke their Sabbath traditions, and even seemed to break the law concerning the Sabbath.  In our day, I wonder if He would tolerate the way we tend to honor broken marriage covenants over individuals. Would He send women and children back into abusive situations for the sake of saving the institution of marriage? When questioned about his apparent disrespect for the Sabbath, Jesus responded, “The Sabbath was made for man, and not man for the Sabbath” (Mk 2:27). I believe the same is true of marriage. God created Eve, because it was not good for the man to be alone. It sounds to me like marriage was created for man, and not vice versa. Yet, I have seen far too many women sent back into dangerous situations for the sake of an institution while they and their children were enduring physical and emotional harm with lifelong effects. Don’t get me wrong! Marriage was ordained by God and meant to be permanent, but God allows divorce because of hardness of heart (Mt. 19:8). However, in the modern church, even though God allowed it, we have labeled sin rather than the result of sin. I believe Jesus would be far more gracious. He would esteem individuals over institutions every time.* (See footnote added on 7-4-18)

In Jesus’ time the religious people were all about show, and Jesus constantly challenged them on it. I wonder what it would look like if He popped into one of our modern day worship services. In one instance, would He endure the lifeless, thoughtless vain repetition of hymns along with the precisely timed rising and sitting? And on the other hand, would He appreciate worship services reminiscent of rock concerts seemingly more intent on conforming to the pattern of this world than glorifying God? I guess the answer to those questions would depend on the hearts of the people involved.  But I feel quite sure He would find much to challenge.  Bottom line is, we as God’s people need to get back to our first love. We seem to think we have it all together, but we are so lacking. Like the church in Laodicea, we are spiritually “wretched, miserable, poor, blind and naked” (Rev. 3:17).  We get so tied up doing that we forget to be the people He intends us to be. Salt adds flavor and light delivers people from darkness. If we were being salt and life, I believe our nation would look completely different right now. Perhaps its time we stop pointing fingers at one another and look at our own hearts. Wouldn’t it be wonderful if his people who are called by his name would begin to humble themselves and pray (2 Ch. 7:14)? That would bring healing to our land. Personally, I would much prefer that to crucifixion in the blogosphere.

*Of course, with the modern church we find extremes on either side. There are domestic violence advocates who deny the power of the gospel by saying that abusers can never change and they attack anyone who says it’s possible. While good advocates knows that seeing an abusive personality change is quite rare, I believe that one of the main reasons for that is a lack of knowledge. Uninformed counselors, therapists and pastors  treat it like a marital problem and actually make matters worse. The general pattern tends to put the burden of the entire relationship on the victim. As a result some advocates have become lopsided in their approach by only addressing victims. They always advise divorce, even when the victims want to try and save their marriages. This unbalanced approached goes against everything we are taught in advocacy training as it once again takes freedom of choice away from those who have never had a voice in their marriages.* It fails to recognize that if we don’t at least try to reach the hearts of abusive people with the power of the gospel, they simply move on to their next victims and perpetuate the cycle. The bottom line is that as these “advocates” aim harsh words at those who are offering gospel hope to offenders they may be hurting the very ones they claim to be helping. They set themselves up as authorities, and like the religious leaders of Jesus’ day, end up caring more for their agendas than lives. That, my friends, is the definition of lukewarm. It is caring more about ideologies more than God and people.

*We do always advise SAFETY for victims, but we have seen cases where a prolonged separation and working with experts has led to marital restoration.