“Evelyn”: The Darkness began Dissipating as the Truth of God’s Word was Revealed 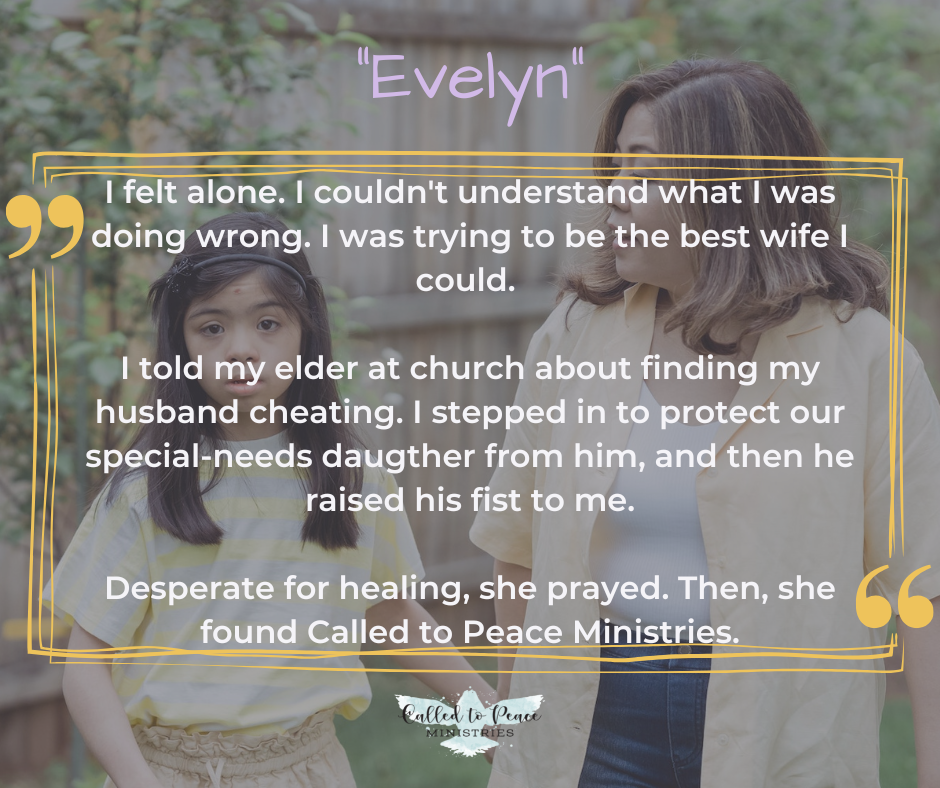 I escaped what I now understand was a 28-year abusive marriage to a man that my sister unknowingly introduced me to as a “really good guy.” He was seven years older than me and owned the business he had started when he was 21. He wanted a family and said his first wife left two years prior when she discovered she couldn’t have children.

When I first met my husband, I found him very charming, attentive, and generous. He made me feel special and safe: weekly flowers, dinner, dancing, and phone calls every night. He seemed eager to get to know me. Little did I know, this would be the opposite once married.

He told me on the first date that he felt he was falling in love, which in hindsight, I now know was a major red flag. On the second date, he started asking me to move in. I told him, no, but we were inseparable, going out every weekend.

I became pregnant. He said he wanted “us” to be a family. It was then I found out he had never actually gotten divorced from his wife.

I lost my job, so I moved in with him as he began the divorce process. Soon after moving in, he came home late from work one night and said he went to see an ex-girlfriend because she wanted him back, but he wanted to turn her down in person. I knew something was wrong and planned to move out the next day, but he talked me out of it.

I found another job and worked till our son was born. He suggested I not return to work because I would be working to pay for childcare, to which I agreed.

When our son was one and a half years old, we got married. That’s when the dynamics changed.

He began withdrawing from and ignoring us and only spent time with us if there was a family occasion or his friends invited us to a gathering. He started working seven days a week. He would get angry at me if I asked him to spend time with us and accuse me of being selfish, controlling, and ungrateful. He always had time to spend with friends. He would complain if I asked for money to buy things for our son and would tell me money was tight. But he always had the money for fishing gear, motorcycle doodads, porn, and booze.

I felt alone. And I couldn’t understand what I was doing wrong. I was trying to be the best wife I could. I was reading Christian books on marriage and following their advice: put him first and try to make our home a peaceful, loving, supportive place for him to come home to.

There were many times I suspected him of cheating but never had proof. But when our son was about 11, I caught him in the act of adultery with a customer. He had to admit to it. I was devastated. I called my mother, and she suggested I speak to one of the church elders.

So, I reached out to my church elder. I told him about finding my husband cheating; he and his wife prayed I would be released from fear.

My husband said he did it because I wasn’t giving him enough sex. We had sex almost every night. (At CTPM we now know, thanks to the research of our friend, Sheila Gregoire, that couples who are having sex daily it is statically usually an abusive marriage.)

I apologized and said I had needs that weren’t being met and needed time with him. He agreed to make changes. For about a week, he was more congenial and gave me a bit more attention. Then it was back to normal. (Understanding dynamics of abuse)

When my son was 12, I became pregnant again. I was put on six weeks of bed rest due to complications. My husband was mean and harsh and complained because he had to do the dishes on the nights my mother wasn’t there to help. The night I went into labor, he yelled at me on the way to the hospital for being inconsiderate because he had worked all week and was tired.

Our beautiful baby girl was born with Down Syndrome. He blamed my “old eggs.” He never really accepted her. He treated her more like a pet than a daughter.

When our daughter turned four, she required open heart surgery. Two weeks before the surgery, I discovered that my husband had been cheating on me with another customer and frequenting hookers for the past eight months.

Before I could leave, my husband “met Jesus.” He started coming to church with us. I couldn’t leave now: I had to give Jesus a chance to work in him. The only thing that changed in our marriage was he would take us out to lunch after church. He never admitted to wrongdoing in our marriage and never apologized.

Due to our daughter’s challenges, we took turns going to church and staying back to watch her. I came home one Sunday, and my daughter told me her father had hit her head with a water bottle. He blamed her and me. As her behaviors got more challenging, he would go after her to hit her. I would step between them and tell him no, and then he would threaten to leave.

Until the last time I stepped in to protect her, and he raised his fist to me.

Concerned, I reached out to a church elder. The elder began to talk about how he wanted to go about marriage counseling. My husband said he was willing to do anything to save his marriage. I told the elder, “I’m sorry, but I take great issue with that statement.” I began to share the things that had taken place in our marriage that had hurt me and never been resolved: the affairs, the mistreatment, and the physical abuse towards our daughter. My husband denied it and then said those things were my fault.

My husband began refusing another “meeting.” When we got home, he said he wouldn’t have gone if he knew what I was going to say. He only went because he thought I would be “set straight.”

I took my daughter and moved to another state for our safety. Once things settled in our lives now that we were away from him, I started having second thoughts.

Wondering if I did the right thing: did I try hard enough? I sank deeper into this dark pit of shame, guilt, and uncertainty. I found a secular support group. Although I learned a little more about abuse, the group seemed to be only about commiserating over our experiences. I wanted to stop the misery. I longed to heal but felt like I would drown in the darkness. I prayed for help to hang on.

Then I found Called to Peace Ministries (CTPM). I understood God’s heart for me through His word and saw how His words were previously used as weapons against me. I was stunned.

The darkness began dissipating as the truth of God’s word was revealed.

I could accept I had been abused in places where wounds couldn’t be seen. It wasn’t my fault. Nothing I did or didn’t do could fix it.

Another great thing about CTPM is developing a community of support by meeting so many genuinely amazing women. These women are strong, courageous, compassionate and beautiful. I realized it wasn’t their fault they were mistreated, but his choice. Realizing that helped me forgive my former husband and myself.

“Evelyn’s” Advice to a Woman in Domestic Abuse: It’s not your fault! You are amazing; that’s why he chose you. Check out Called to Peace Ministries. It’s an incredible ministry that helps women like us. They’ve been right where you are, so they understand, made it out, and are on the other side. And they want to help other women get to the other side.​

Join us in our mission to offer hope and healing to victims of domestic abuse, emotionally destructive relationships, and sexual assault.