Is My Relationship Abusive? Part 3 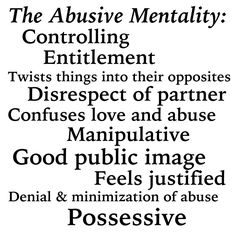 Part 3 in a Series. Today’s post will cover three of the 8 tactics abusers use as listed on the Power and Control Wheel. For more on the Wheel, see my previous post.

At the top of the Power and Control Wheel we see that abusers use coercion and threats to maintain control. In the years I have worked with victims of domestic violence, nearly all of them have confirmed that these behaviors were used regularly in their homes. Some abusers threatened to leave their families and not provide for their basic needs, some threatened suicide in order to make sure they got their way, some threatened physical harm, and others just threatened to humiliate their wives somehow. In several cases, I’ve seen abusers go out of their way to make their wives look incompetent. After years of living with control and manipulation, my friend Jill became seriously depressed, and ended up taking anti-depressants. Her husband made sure he let the pastor know how concerned he was about his wife’s erratic behavior, her inability to parent properly, and her dependence on medication. Of course, the church had no idea of what really went on behind closed doors, and Jill knew better than try to tell them. At the same time, Jill’s husband made sure she knew that if she decided to leave the marriage, he would have no trouble having her declared incompetent and getting full custody of the children. For Jill this threat was far more powerful than bodily injury ever could have been. Her husband’s threats were highly effective in promoting his selfish interests.

Abusive people generally aim their threats directly at whatever their victims value most, so that means threats involving children are very common in these situations. In fact, many women stay in horrible situations far too long, because they know if they leave their spouses may harm the children. Such was the case with my friend Amy. She had endured occasional physical violence and relentless threats from the beginning of her marriage. Her husband kept a gun beside their bed, and let her know that if she ever tried to leave him he would use it on her. He even held it to her head on a few occasions. She knew she needed to leave, but was concerned about her children if she did, because he told her if she left he would “still have the children.” She wasn’t sure what he meant by that, but knew it wasn’t good. Finally, there came a day when she felt that if she didn’t get out, she would not live parent her children at all, so she mustered up the courage to take them and leave. Shortly after separation, Amy had to go to court to try and get legal custody of the kids. She told the judge her concerns about the children being with their father, but he granted regular, unsupervised visitation to her husband anyway. Amy wanted to believe that her husband wouldn’t make good on those vague threats, and that the court had made the right decision. However, in within a short amount of time, her 3-year-old son came home reporting being locked in a closet and giving descriptions of sexual abuse he and his sister had endured. Amy was finally able to stop the unsupervised visitation, but she learned that the threats against her children were not idle.

Unfortunately, Amy’s story is not an exception when it comes to domestic violence. In my own limited exposure, I have seen abusers intentionally use and misuse their children multiple times in order to punish their spouses. In other cases, it is not unusual for them to attempt to turn the children against their mothers. Basically abusers will do whatever they consider necessary to maintain control, regardless of the consequences to the children. I have seen women frozen in fear, because of these types of threats, but those I have known who decided to leave all tell me they made the right decision—even Amy. She believes things would have been far worse had she stayed. Living in fear of a man will never lead to the life God intends for you. Ask Him to help you devise a plan to leave, and be sure to utilize all the resources available to you. Your local domestic violence shelter can help you devise a safety plan, and connect you to legal resources to help you with custody issues.

Besides using their children to hurt their wives, abusers make regular use of intimidation techniques to instill fear and attain unfettered power in their families. Intimidation can range from a harsh look to extreme physical violence. Most abusive people have conditioned their victims to know when they are about to snap. As a result, a single angry glance can cause wives and children to completely freeze up or change their course of action. If a nasty look doesn’t get the desired result, or if the abuser is feeling particularly grumpy, he may resort to more physical tactics such as throwing and smashing things, destroying her property, or even abusing the household pets. When I was working at the shelter, one of the clients told me that her husband decapitated her dog in front of her and the children, and countless other victims told me that their family pets often received the brunt of the abuser’s wrath. One lady told me that her husband filled her car with poisonous snakes to make sure she didn’t go anywhere.

Intimidation is a highly effective tool for perpetrators of domestic violence, and it usually escalates in intensity if the abuser does not feel his demands are being met. Some of the behaviors often seen in the progression of violence include: blocking her exit from a room, screaming, raising a fist, denying access to prescription medicine, grabbing, jerking, shoving, spitting, pulling hair, and so on. If these methods do not work, then punching, kicking and other methods of inflicting more serious physical harm are likely to follow. An interesting thing to note here is that, even when hitting occurs, many abusers, in an effort to keep the abuse hidden, maintain enough control over themselves to make sure they hurt their victims in way that doesn’t leave obvious bruises.